The world really started to have a taste for anime in the late 80s/early 90s, when series like Dragon Ball and Sailor Moon first appeared.

They were different from the shows already on television both in terms of plot and visual style, which helped them attract attention. However, they weren’t exactly popular with the general public for a very long time.

Fast forward to the present day, and anime has become an important part of the entertainment world. To see how much the appetite for the genre has grown over time, I looked at some key anime stats.

Here are some intriguing stats to get you started:

How Many People Watch Anime?

1. More than half of Netflix's 222 million subscribers have watched at least one anime in 2021.

Netflix noticed that in 2021, the time spent watching anime increased by 20%. And that's just the data released by Netflix. There are so many other sources for watching anime that it becomes impossible to count the total number of anime fans. But it is known for sure that the popularity of anime continues to grow every day and attract viewers from all over the world.

Below is some data to help you better understand the world of anime.

In August 2021, the specialist anime streaming service revealed that it had surpassed the 120 million registered users mark. At the same time, it also reached above five million subscribers.

Crunchyroll statistics show the platform had over 60 million followers across social media at the time.

Anime shows aren’t cheap to create. While this usually varies depending on numerous factors, an anime episode can cost between $100,000 and $200,000.

4. Fullmetal Alchemist: Brotherhood is the top-rated anime on MyAnimeList with a 9.13 rating.

As of August 2022, Fullmetal Alchemist: Brotherhood is the highest-rated anime, according to MyAnimeList stats. It has 9.13 stars in a rating system where users give 10 stars to a show they consider a masterpiece.

The 2009 title also has a 100% approval rating on Rotten Tomatoes. The series had a mission to faithfully adapt the original manga after the 2003 anime series failed to do so.

The critically acclaimed anime movie is a technical achievement for the anime industry in Japan. It consists of 2,212 shots and 160,000 single pictures, which is two to three times more than your average anime movie.

In addition, Akira uses 327 colors, 50 of which have been created specifically for the movie.

What is the Most Popular Anime of All Time?

6. Naruto is the most popular anime in 93 countries, including the United States. 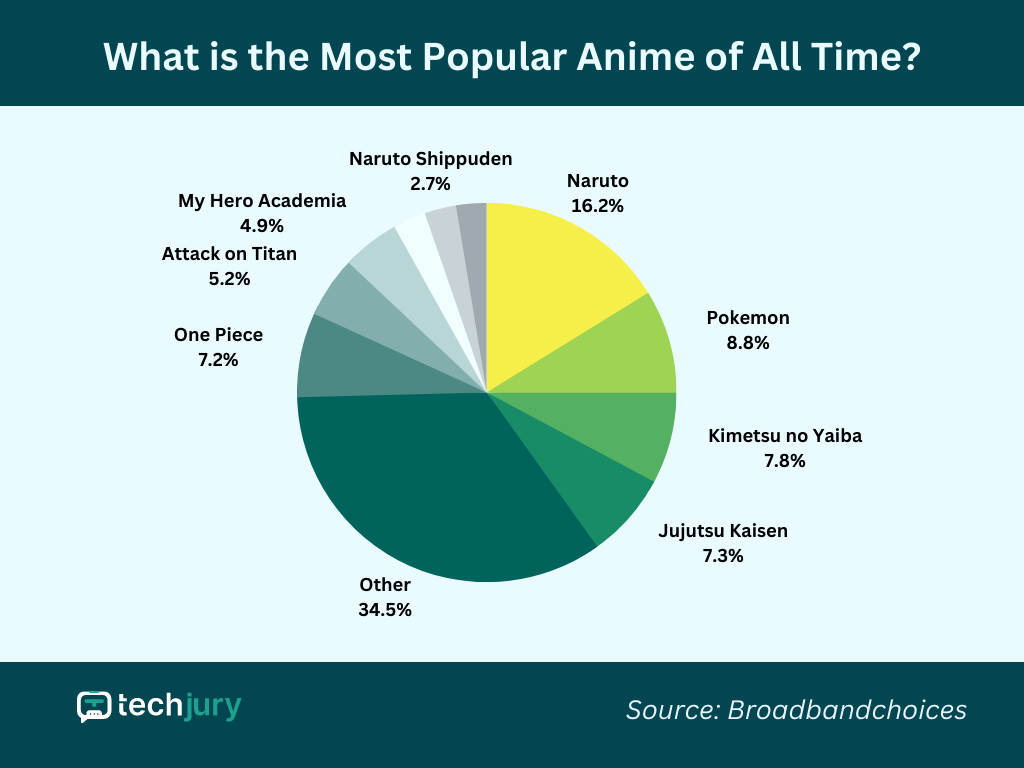 Anime is currently among the fastest-growing genres. This increase in popularity started with the beginning of the COVID-19 pandemic. Global demand for anime has grown 118% since then.

Anime statistics for 2022 show that the share of global demand anime took across all genres increased from 4.2% in January 2020 to 7.1%.

Surging viewership has also resulted in more deal-making around the genre. AMC Networks acquired anime distributor and streaming service Sentai Holdings. And Sony bought Crunchyroll, one of the biggest anime streaming services in the US, in a $1.2 billion deal.

8. More than half of Netflix’s global subscribers watched anime in 2021.

Kohei Obara, anime creative at Netflix, revealed earlier this year that over half of the streaming service’s global users watched anime in 2021. He also said that nearly 90% of Japanese users tuned into it last year.

Crunchyroll shared some market research statistics at the Acceleration Japan (A-JAPAN) industry showcase. According to its survey, only 6% of Gen Z have never heard of anime. In comparison, 27% of the general population isn’t familiar with the genre.

How Much is the Anime Industry Worth?

The demand for anime content continues to increase. This growing popularity will likely drive anime market expansion. It’s expected to reach $52.99 billion by 2032, with a rapid compound annual growth rate (CAGR) of 7.5%. 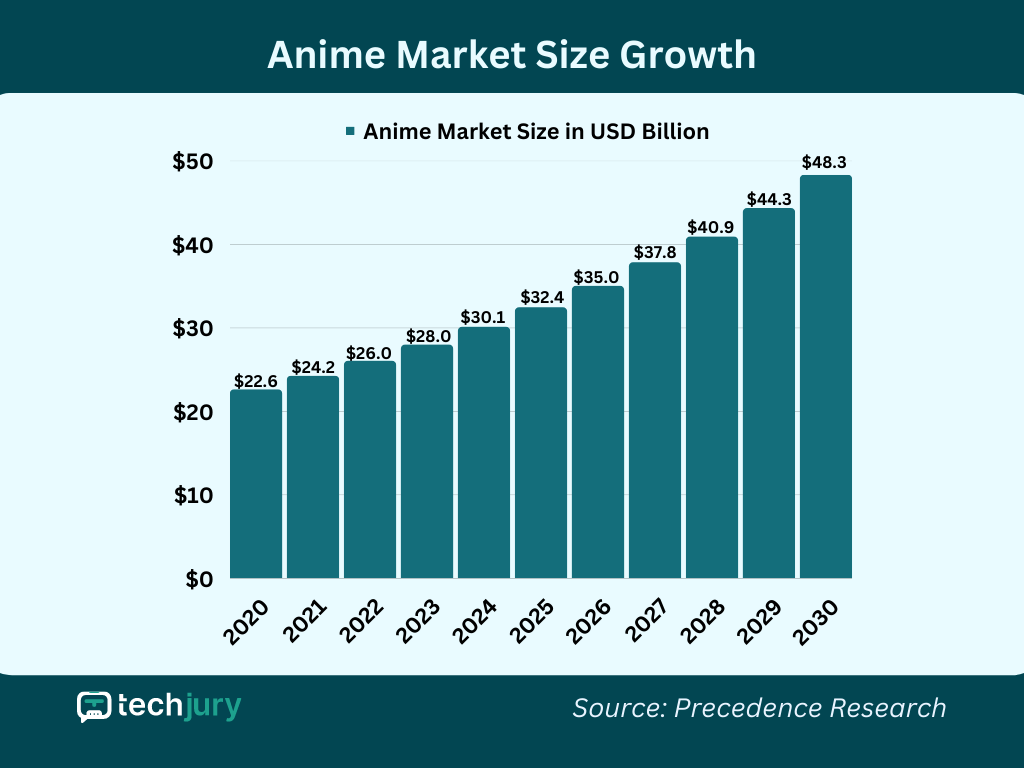 The anime industry continues to do well, with some bumps along the way. The COVID-19 pandemic didn’t exactly help it grow, but it’s anticipated it’ll fully recover soon.

11. The overseas anime market surpassed Japanese sales for the first time in 2020.

The overseas anime market overtook that of Japan for the first time since the Association of Japanese Animations (AJA) started tracking it.

AJA reports that the internet distribution market was worth 2.4261 trillion yen (roughly $21.32 billion) in 2020. The overseas market, chiefly North America and China, accounted for approximately 51% of the total amount.

Next on the list is Anpanman which has earned a total of $44.9 billion. 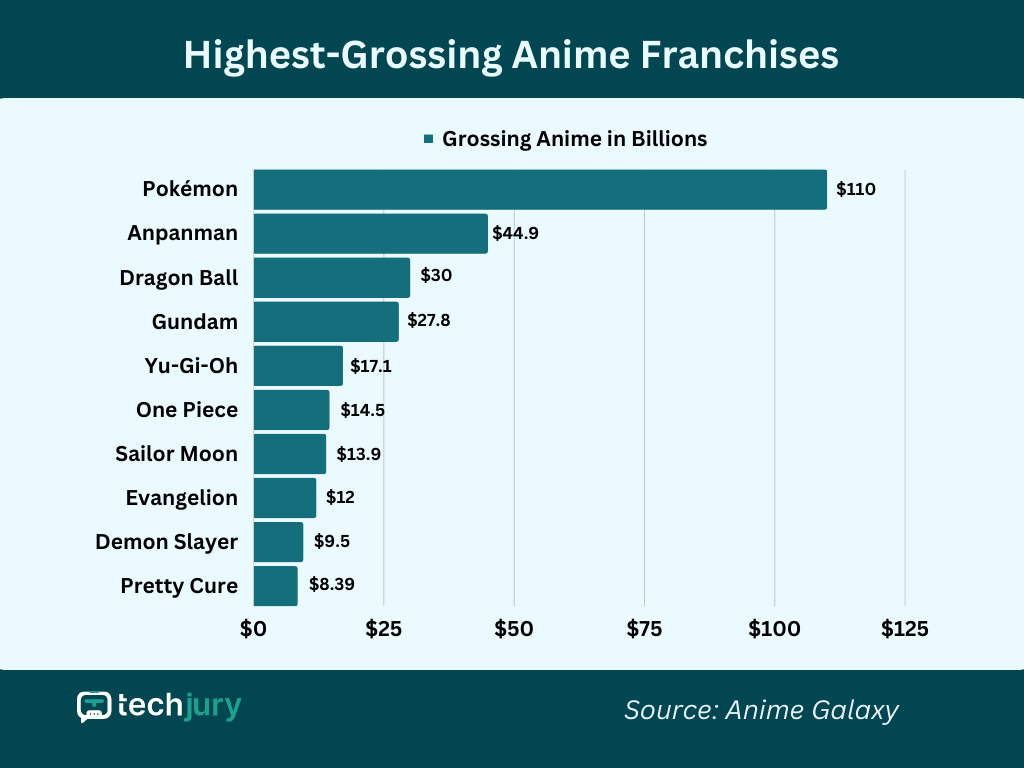 After the expansion of anime in the 90s, the number of produced TV anime minutes grew every year until 2006, when it reached 136,407. However, after that, the market drastically shrunk. In 2010, studios only produced 90,445 minutes.

With the emergence of streaming services and more overseas demand, 130,347 minutes of anime were made in 2018. Anime statistics show the number dropped to 106,966 in 2019 and then even further following the COVID-19 pandemic.

Teikoku Databank reported that 39.8% of the 309 production companies participating in a recent study had incurred losses in 2021. This number was higher by 0.9% compared to the year prior.

Teenagers and young adults are into anime more than other generations. Men generally watch it more than women, but that’s not the case everywhere.

The majority of fans started watching anime less than 10 years ago.

Anime audience statistics show there are more men than women among all binary anime viewers. Out of 14 markets surveyed, the US has the least female viewers, with only 35%.

How Popular is Anime in Japan?

17. 33% of people in Japan said they either watch anime or read manga.

According to a recent study, 33% of people in Japan engage with anime or manga content. With a population of close to 126 million, that translates to 41.5 million people.

An online survey held by QQ Big Data showed that 66% of Japanese born between 1995 and 2000 watch anime on a daily basis. 21% of them say they usually see seven anime every week. Also, 33% spend six or more hours on the activity weekly.

Another survey showed that the average age of anime watchers in Japan is 32.

How Popular is Anime in America?

The US and North America as a whole are the number one overseas market for Japanese anime. Take a look at anime statistics in America to see how popular it is. 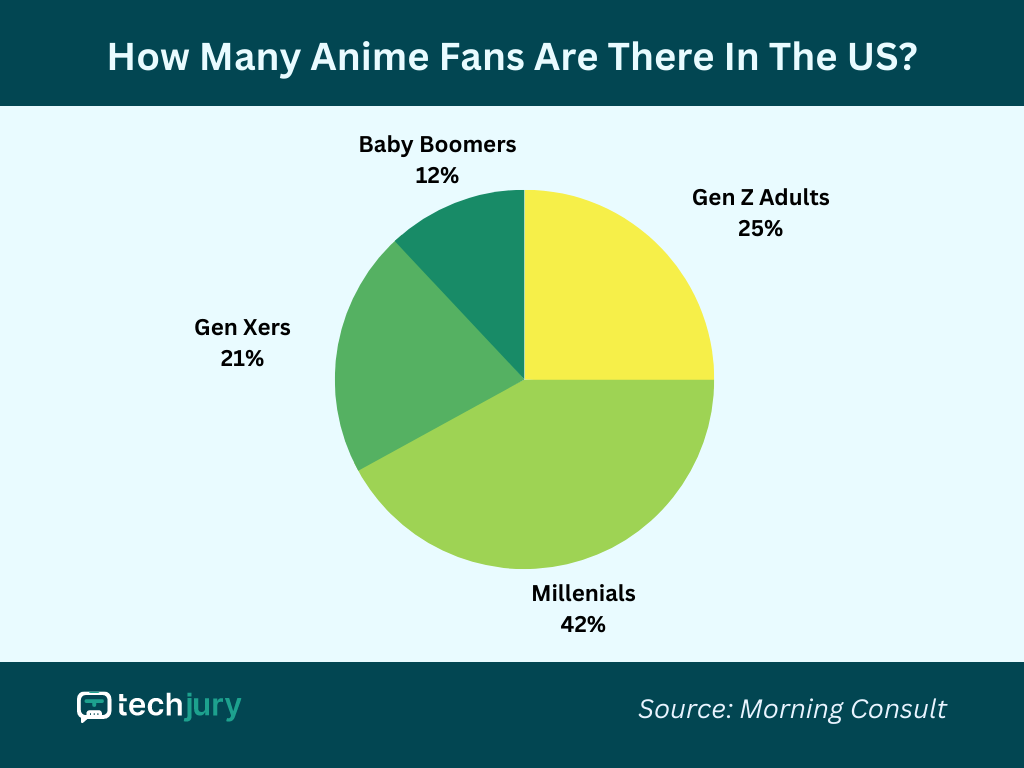 19. 42% of millennials in the US reported they are anime fans.

In a Morning Consult survey, 25% of GenZ adults and 21% of Gen Xers said they like to watch anime.

The same study showed that older generations are less likely to be anime fans. Additionally, only 12% of baby boomers are anime fans.

As of 2022, anime audience demographics confirm that close to 18% of Americans watch anime. That explains why over 200 anime are dubbed in English.

21. The US is the country with the highest demand for anime titles outside of Japan.

Parrot Analytics tracked the average daily Demand Expressions for anime titles per 100 capita and aggregated the results by country.

The US easily topped the list with 0.95 Demand Expressions per 100 capita. That’s over twice as much as the second-best-rated country – the Philippines. The only European entry in the top ten was France.

22. Naruto has approximately 1.97 million monthly searches in the US.

23. Dragon Ball Super: Super Hero film earned $10.7 million on its opening day in the US.

Crunchyroll and Sony Pictures both screened the movie in 3,007 locations in the US, which marks the widest release ever for an anime film. It went on to make an incredible $20.1 million in its first weekend. In comparison, Dragon Ball Super: Broly earned $9.8 million in its first two days.

24. Between January and February 2021, Attack on Titan was the most demanded series in the US.

During this period, Attack on Titan was the most sought-after show, with a demand rating of 110.5x the market average.

Attack on Titan is also considered the top anime on Crunchyroll after the platform gave it its 2022 Anime of the Year award.

And there you have it – the most important anime stats to help you better understand its world.

Now, it’s time for an Attack on Titan episode!

Why Do My AirPods Keep Skipping? 6 Effective Solutions!

What Streaming Service Has WE tv in 2023? The Top 5 Choices!