How Does the Battle Pass Work in Warzone 2? [Cost & Rewards]

With the release of Warzone 2, we are introduced to the brand new Season 1 Battle Pass for both the Modern Warfare II Multiplayer and its Battle Royale sibling.

While there’s no simple answer to the question: “How does the battle pass work in Warzone 2”, we do our best to explain its non-linear and rewarding structure.

Learn more about navigating the WZ2 Battle Pass below!

Warzone 2 Battle Pass: How Much Does It Cost?

You can also get a head start with the Battle Pass Bundle for 2,400 COD Points (or $19.99), which comes with 25 Battle Token Tier Skips (needed to unlock items) if playing on PlayStation or 20 on all other platforms that support Modern Warfare II.

However, if you own the MWII Vault Edition, you can access the entire Battle Pass free of charge, along with 50 tokens, which will take you halfway through its progression.

The new and revised Battle Pass is just one of the many CoD changes introduced with MWII, and a starting point of a new era in the series, as per Activision.

Warzone 2 Battle Pass: How Many Items Does It Offer?

While there are a total of 20 unlockable items in the base (free) version of the Battle Pass (including weapon blueprints, stickers, calling cards, and 400 COD Points), players must spend the aforementioned amount of points to get a chance of unlocking all 100+ items.

However, once you upgrade to the paid version, you can earn additional 1,000 COD Points for a total of 1,400—more than enough to secure next season’s Battle Pass.

Instead of a strip of unlockable content, the Warzone 2 Battle Pass is an Area of Operations map divided into 21 Combat Sectors from A0 to A20, each containing five items.

That’s a big and unexpected Warzone 2 change, right? It’s all for the better, though, since you get a much more flexible Battle Pass with multiple interconnected paths.

However, the Bonus A0 Sector is detached from the map since it’s exclusive to players who purchase or activate the Battle Pass and includes Zeus—the season’s operator.

If and when you reach 100% Battle Pass completion, you will unlock the ultimate Victory Sector, which includes valuable goodies such as a golden variant of the Zeus Operator, a custom-built weapon blueprint, and 300 COD Points. 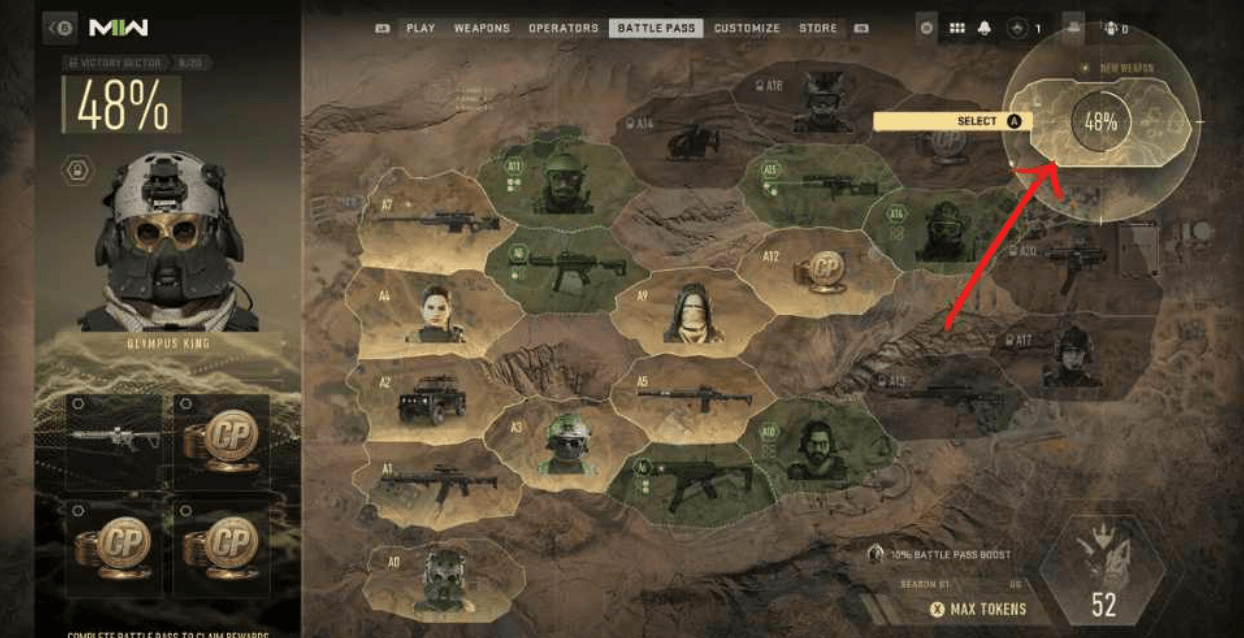 image credit: callofduty.com—pictured above is the 22nd Victory Sector tracking your Battle Pass progress, which will unlock at 100% completion, excluding the Bonus Sector.

Warzone 2 Battle Pass: Can You Unlock Any Sector?

When starting out, you only get access to the A1 Sector, which when completed unlocks its adjacent sectors, which are A2 and A3 in this case.

At this point, you can choose any path you like depending on the items specific sectors offer, which you can always look up just by clicking on the corresponding tile.

You can even work on completing multiple sectors simultaneously if you want to. 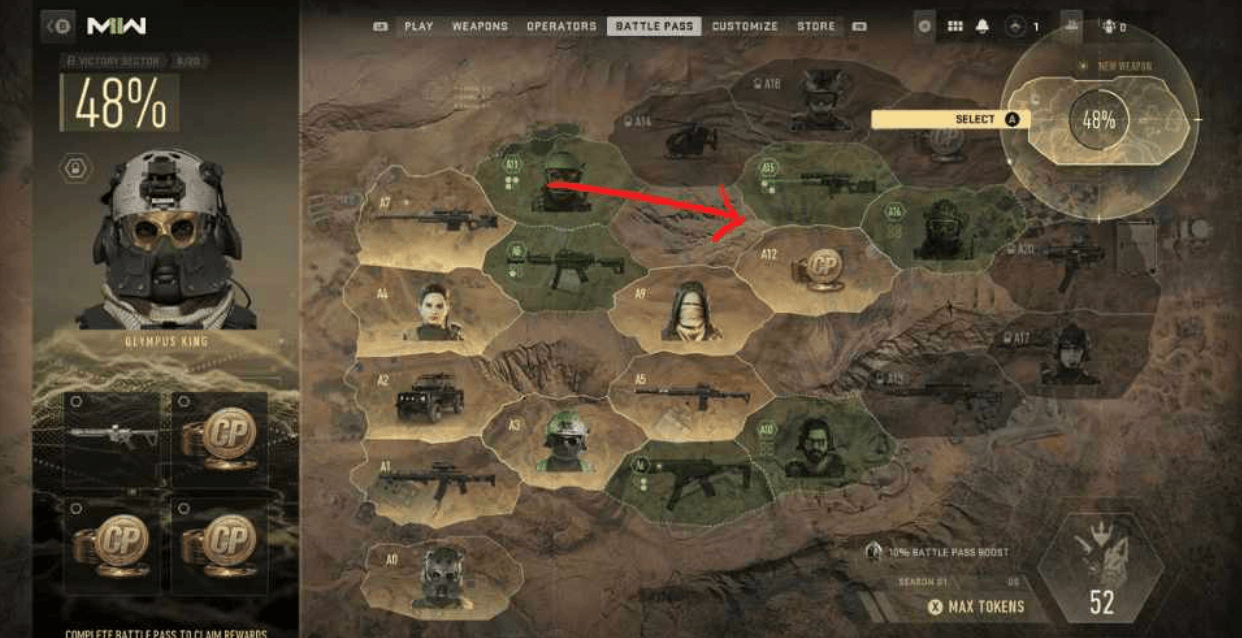 pictured above: the path to A15 and A16 is unlocked since A12 has been completed, but the sectors beyond them will remain closed until one of them is fully unlocked.

To fully unlock a sector, you must use one Battle Token Tier Skip for each of the four lower rewards plus the main reward: the High-Value Target (HVT).

In most cases, the HVT is a weapon, blueprint, or operator, and becomes available only after you unlock all the other rewards within the sector.

Note that you can use the attachments of unlocked weapon blueprints on any weapon that can equip them. For further info, check out our detailed guide on how the gunsmith works. 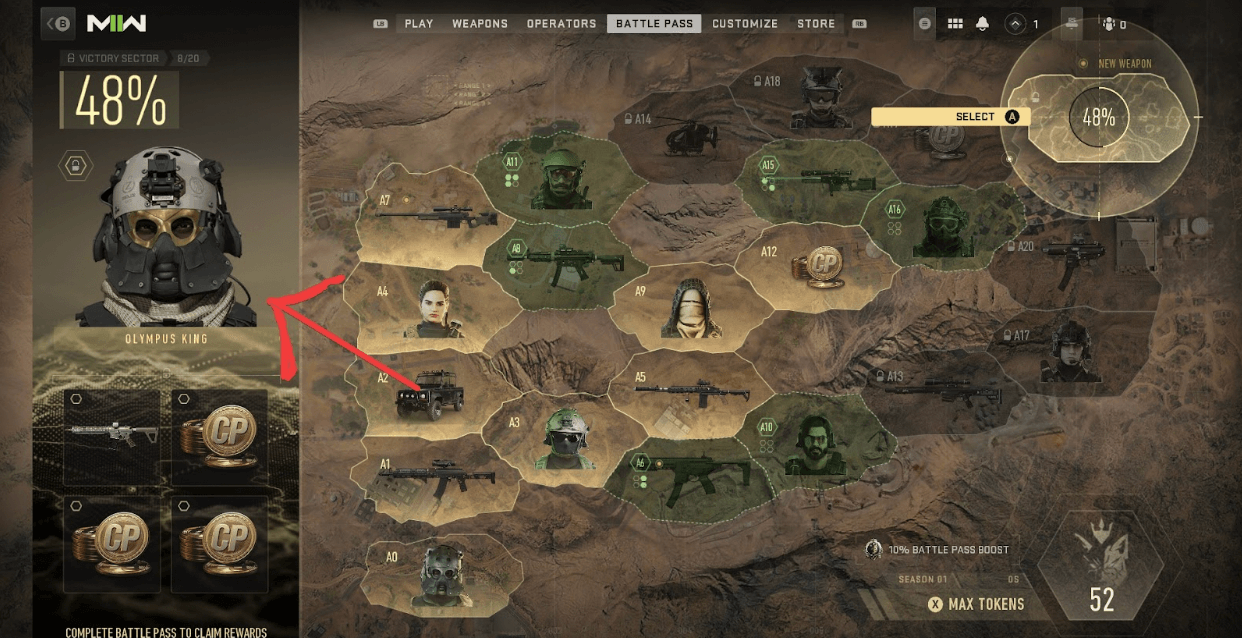 pictured above: a preview of the HVT and the four base rewards included in the Victory Sector; all other unselected sectors also show an icon of the HVT they contain.

Warzone 2 Battle Pass: How to Get Tier Skips?

You can get Battle Token Tier Skips by simply enjoying the game and earning XP points or buying them with COD Points (as long as you own the Battle Pass) with individual tokens costing 150 COD Points each.

While you can purchase 200 CP for $1.99, the more sensible approach is getting the Battle Pass Bundle, which comes with 20 or 25 tokens (depending on your platform).

Once you start earning or buying tokens, they will be deposited in your Battle Token Bank, which you can access to spend whenever and however you see fit.

If you are on the base (free) path, you will still have to spend five tokens to complete a sector, even if you can only use one item out of all five.

Thankfully, if you purchase the full Battle Pass at any point, all rewards you have already claimed will become available immediately. 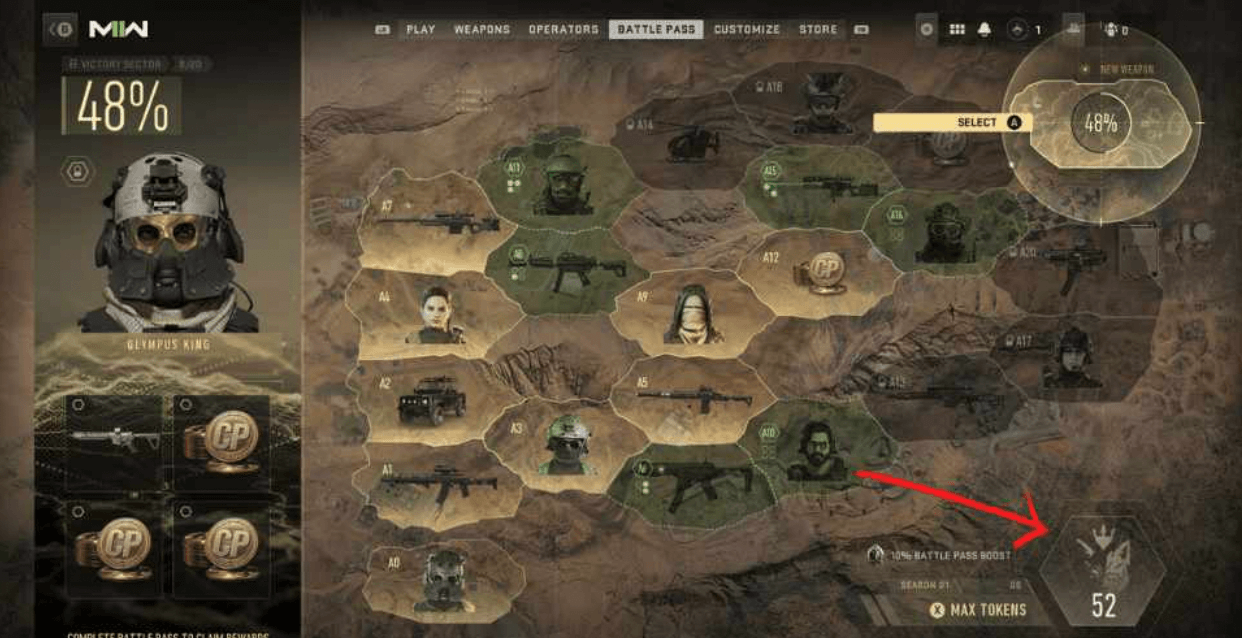 pictured above: a Battle Token Bank showing 52 Tier Skips ready to be used.

So how does the Battle Pass work in Warzone 2? This time, you progress through the sectors in the new Battle Pass map. To complete each sector, you must spend five Tier Skips for its five rewards, after which you can move on to an adjacent sector of your choice.

As you can see, this revamped progression style still abides by the live service game model with a slight twist and manages to offer more unlockable items than before.