How To Force Quit On Mac? [All You Need To Know]

Macs are highly regarded for their consistently smooth performance.

But like all things, they aren’t perfect - apps may cause them to freeze up from time to time.

Aside from a drop in performance, the definitive sign that the Mac gives you when it’s struggling is the spinning rainbow wheel.

Leave it to Apple to make a literal rainbow-colored ball synonymous with anxiety.

There is a simple solution, however.

Let me teach you how to force quit on Mac

How To Force Quit On Mac?

When an app becomes unresponsive, more often than not, waiting a few seconds should do the trick.

If it doesn’t manage to sort itself out, you should try to close the application on your Mac by the usual means. These include:

Some users may immediately go for the power button to hard reset, however, you should only do this as a last resort.

Now - how to tell your Mac to force quit some apps?

There are several ways to do this, depending on the situation you're in.

Note that the device will not prompt you to save your work but will immediately shut the app down. That’s why you should always make sure you have auto-save on.

App icon in the Dock

The first thing you should try:

Here is an example where I force quit Preview on my Mac: 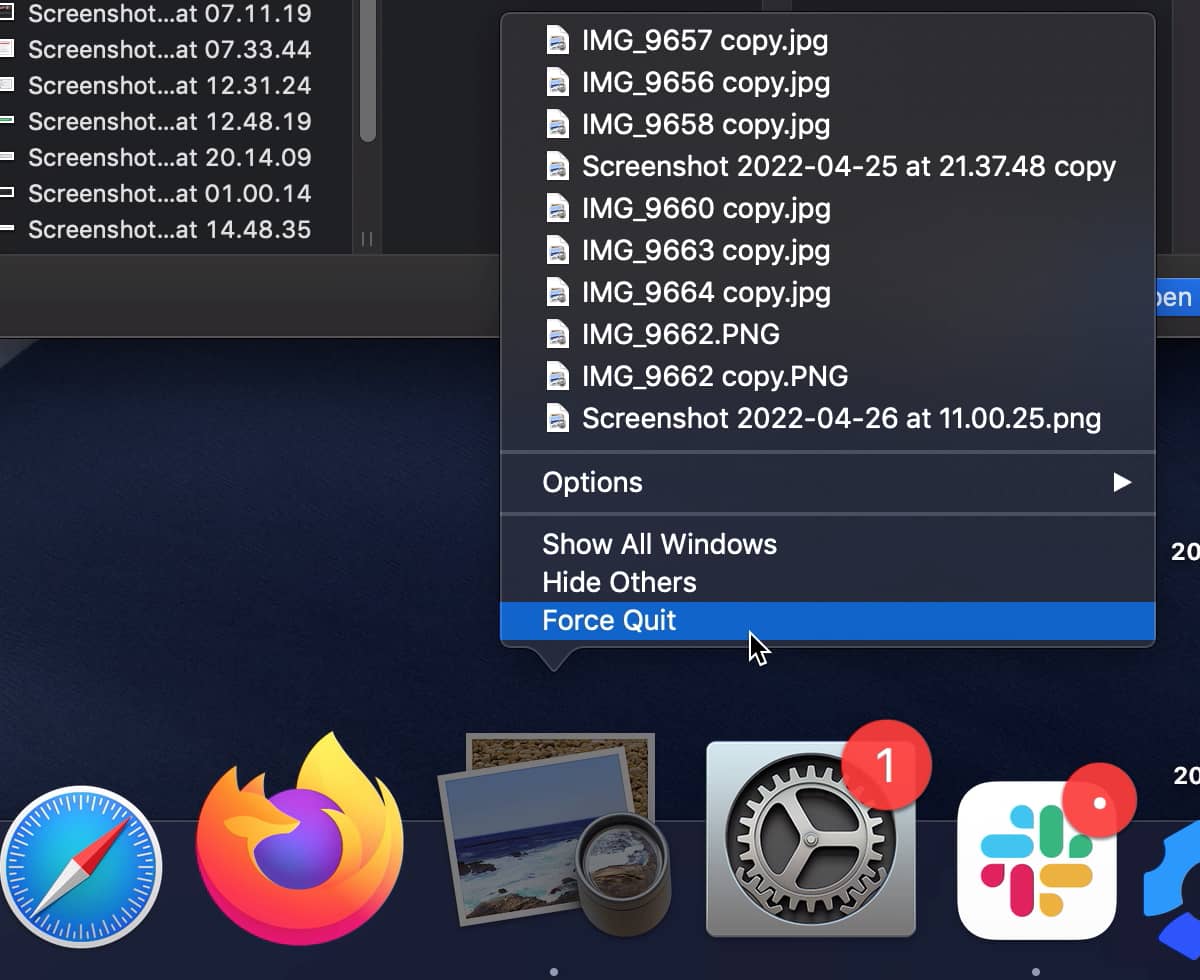 If an app has completely frozen up, instead of Quit, the menu will show the Force Quit option. That’s how you’ll know its not responding.

The next and probably easiest way is to use the Mac force quit shortcut - Shift + Option(Alt) + Command + Esc.

That is of course if you’re good at remembering shortcuts.

This method is especially useful if the unresponsive app prevents you from clicking anything in the menu bar or the Dock. Just make sure to have the problematic program highlighted so you don’t force quit another one by accident.

The next way to force quit an application on Mac is by using the Activity Monitor.

Although rare, there are occasions when the culprit is an underlying background process or task. Sometimes the issue might be harder to get rid of.

Activity Monitor lets you pinpoint and force them to close when all else fails.

There are three ways to open it:

Note that when you end a task on Mac it may mess up some open apps or files related to it.

And definitely don’t fiddle with any kernel tasks or system processes. These are directly related to the OS, so force quitting them may cause further problems.

If you aren’t sure, you can always look up a background task online and learn what it’s related to.

The other way is to use the dedicated Apple Force Quit window. It shows all the open apps in a list that lets you select and force quit the one you need. This is especially convenient if you have a lot going on. 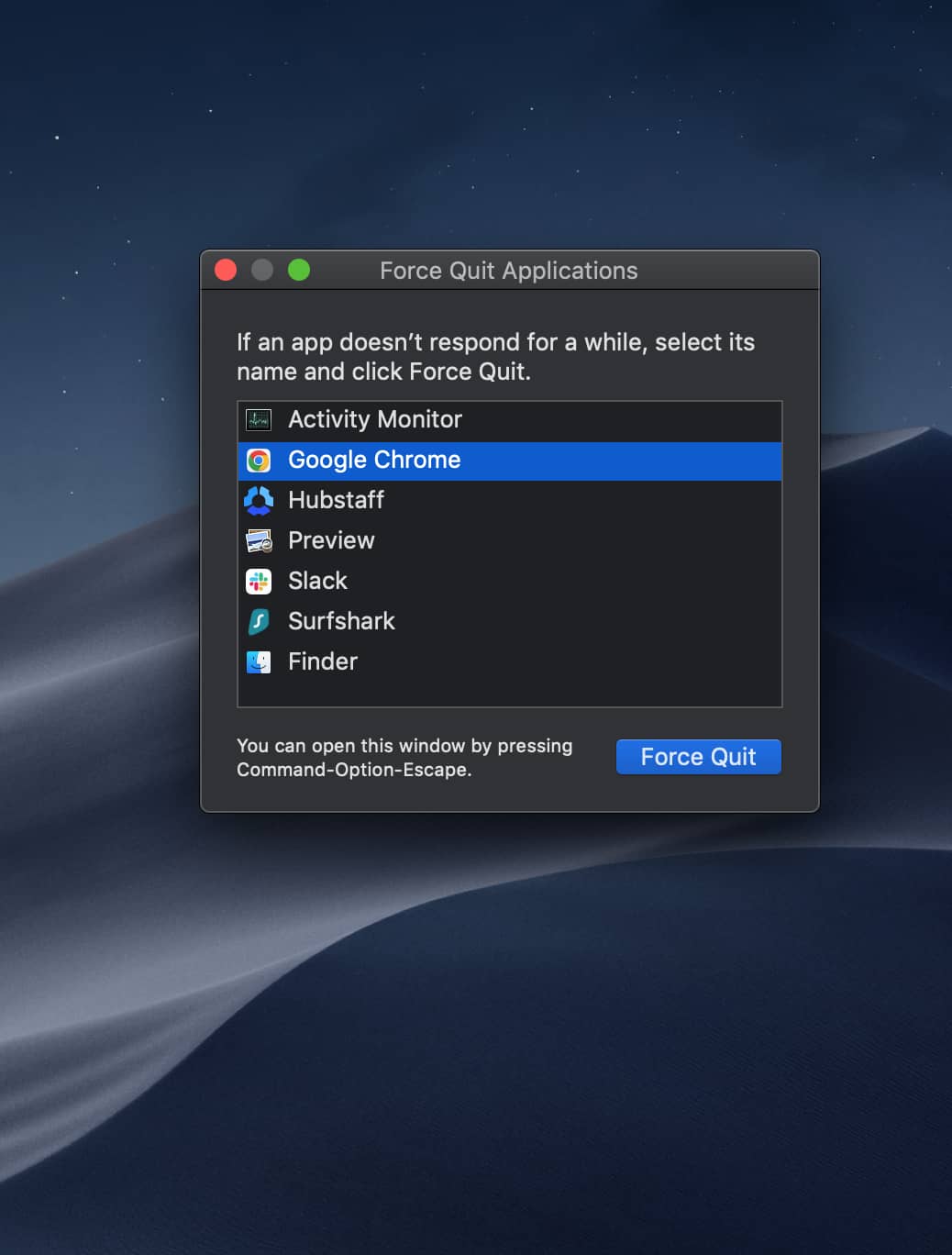 The list will usually say “Not Responding” against the faulty app, making it easier to pinpoint.

In case you can’t click on the logo, you can use the Option(alt) + Command + Esc shortcut to immediately open up the window.

What To Do If Force Quit Isn't Working On A Mac?

Sometimes things can get bad.

With force quit not working on your Mac, the only option is to restart it.

Ideally, you want to try and shut down normally by using the Apple icon menu. Furthermore, if you manage to do so, make sure to deselect the option to reopen windows on startup. This will prevent your Mac from potentially freezing straight away after powering up.

If this doesn’t work and you can’t even click or select anything, then press and hold the power button to perform a hard reset.

It is usually a good idea to wait a few seconds before powering it back up.

Force shutdown should be left as a last resort.

Firstly, because it will lead to some data loss if you didn’t save before the issue began, and secondly, because it may corrupt the files you were working on.

Although the latter happens rarely, it is certainly something you need to keep in mind.

Although Apple’s systems have rightfully earned their great reputation, they aren’t impervious to badly constructed apps or overuse.

Knowing how to force quit on a Mac is necessary for any user. It will successfully resolve a large amount of the issues you will ever experience on your system.

And now that you’re armed with that knowledge, nothing can stop you!