How to Make Fireworks in Minecraft in Under 5 Mins

Looking for something new to do in Minecraft?

Maybe you’ve slain the Ender Dragon and want a new challenge. Maybe you just finished that massive build you planned and now you’re getting bored.

Or maybe you just like watching stuff explode. Hey, no judgment!

Either way, let me show you how to make fireworks in Minecraft.

Also known as Firework Rockets, they’re items used for bright decorative explosions. If you want to set up a multi-colored festive display in your world, they’re exactly what you need.

Spoiler alert: You can do more fun stuff with fireworks. You can use them as crossbow bolts and blow up some mobs, or even make your own jetpack.

But we'll get to that later. First things first.

How to Make Fireworks in Minecraft?

It’s worth mentioning you can get a basic Firework Rocket in Creative mode. It’s one of the items available in your inventory.

But that’s a very barebones option with no visual effects. If you want a more spectacular performance – or if you’re playing Survival mode – here’s what you need to do:

To acquire gunpowder, grab your trusty weapon, head out and find a Creeper.

Killing a Creeper is easier than it sounds. Remember, they explode when near you. Just hit it once and quickly back away. Boom, done.

Now you need paper. Find and mine three sugar canes, then go to your crafting table. Arrange the three canes like this: 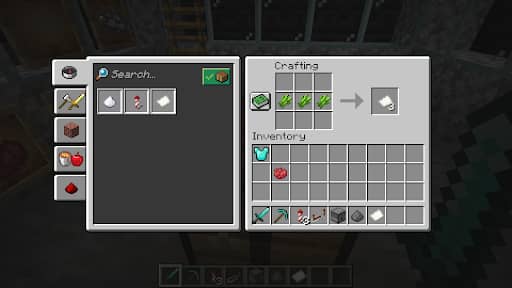 There - you have your second ingredient for the firework recipe.

Combine the gunpowder and paper as shown below for a basic Firework Rocket. 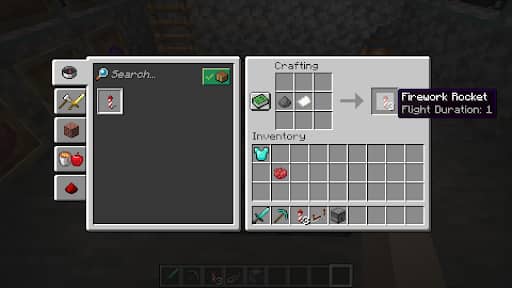 Notice how this one says “Flight Duration 1”. When crafting a rocket in Minecraft, you can add more gunpowder to make it stronger. The maximum is three pieces of gunpowder for a Flight Duration of 3. They need to be arranged separately – putting a stack of three in one square won’t work. 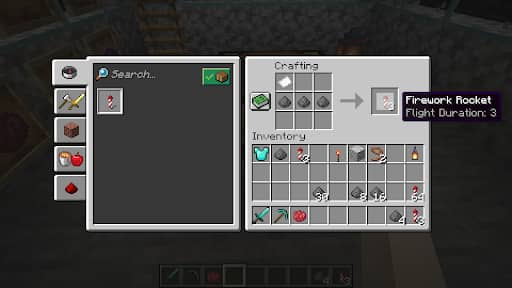 Right now, you have a Firework Rocket. Don’t start celebrating yet, though. You’ll notice it’s not exploding in the sky.

That’s because you need a Firework Star. That’s a second item you craft to give your show the pizazz it needs.

Before we delve deeper, here’s an idea of what I’m talking about. The simplest Minecraft Firework Star you can make goes like this: 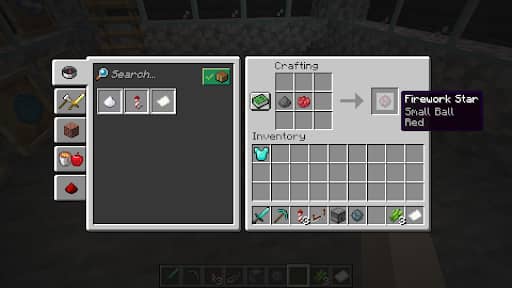 One piece of gunpowder plus one piece of any dye gets you a Star of that color. In the picture, I’m making a red one.

Once you have a Star, combine it with paper and gunpowder for a rocket that explodes in a small ball of color. 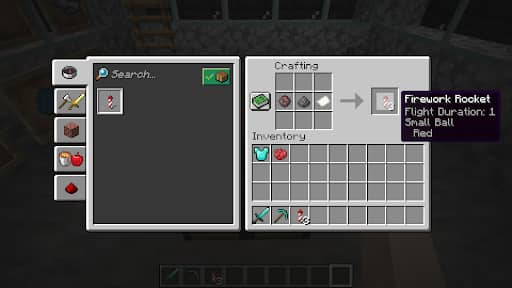 Again, this is a basic model. A Minecraft Firework Star is responsible for the color, shape, and additional effects of your pyrotechnic display. Each of those aspects is determined by the components you use for your Star.

Now that you know the basics, let’s cover some of the types of fireworks you can make:

This one’s self-explanatory. Add a dye of your choice and you get a Star that’ll change your firework colors. You can add more than one for a fancier multi-color show.

In addition, you can add an ingredient to your crafting table that’ll change the shape of your Firework Star explosion. Here’s a list of possible shapes:

Once you’ve picked your desired color and shape, you can add some more firework effects. Here are your options:

As with everything in Minecraft, you have a huge amount of freedom to experiment. Between the different colors, shapes and effects, there are 2,1 trillion firework variants in the game.

Here’s what a more complex Firework Star recipe looks like: 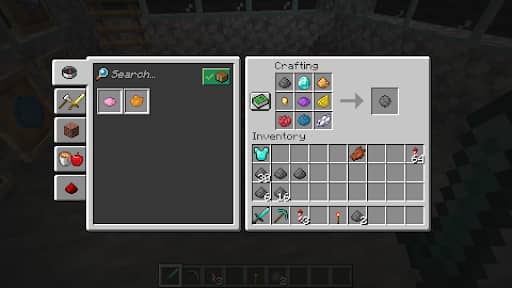 As you can see, I’ve added a diamond and Glowstone Dust for both effects. I have a gold nugget for a Star-Shaped explosion. And I’ve filled the rest of the slots with some dyes.

And here’s the result: 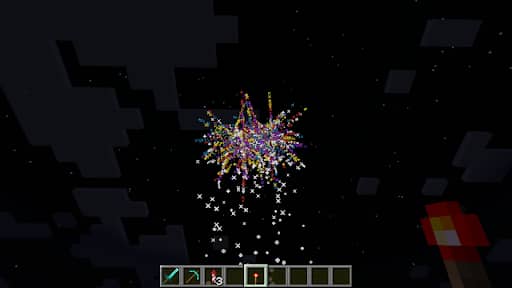 Now you know how to make fireworks in Minecraft.

But do you know how to use them?

Like I said in the beginning, there are a lot of things you can do. You can set them off manually or build a repeater for a larger-scale show. YouTuber Vivtorsing goes into detail on making a repeater dispenser here.

You can also shoot fireworks from your crossbow. 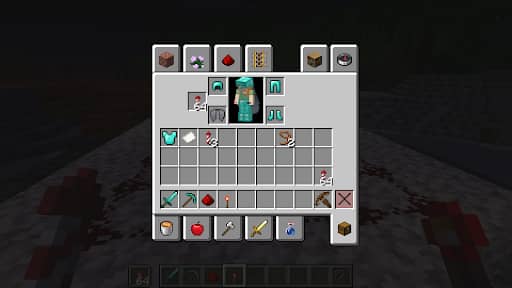 Don’t forget to hold right-click – cocking the crossbow takes a second or two.

How to Use Fireworks With Elytra?

Minecraft worlds are massive. Walking around in Survival can quickly become a chore. Especially if you have multiple bases to travel between.

What if I told you that you can fly around instead?

Elytra are very rare wings you can only find in the End Cities. Their official description says they’re the “only source of flight in Survival mode”. In truth, on their own, they’re your best source of...gliding.

If you want to soar in the skies, you need to tweak things a bit. Here’s the drill:

Congratulations! You now have a jetpack.

Careful with your landings. Descend slowly and hit the ground at an angle. If you go straight down, you’ll take fall damage.

Bonus tip: Remember when we talked about adding more gunpowder to the firework crafting recipe?

You might be tempted to do that now and get more flight time per rocket.

Don’t. You’re better off using the Level 1s. They cost one gunpowder and give you a one-second boost.

By comparison, Flight Duration 3 costs three pieces of gunpowder and only boosts you for three seconds. It’s a poor use of your resources.

Mojang’s game is one of the greatest sandboxes of our time. There are so many things you can craft, and even more ways to use them.

Unleash your creativity! Experiment with the near limitless combinations available. Weaponize rockets or set up a massive pyromancy show. Soar like a bird or use them as distress flares when you get separated from your friends.

The sky’s the limit. Literally.

How to make colored fireworks in Minecraft?

Add color to your Minecraft fireworks by crafting a Firework Star with a dye of your choice. Then add the Star to the original recipe for a colorful firework.

How to get gunpowder in Minecraft?

In Minecraft, gunpowder is obtained by killing a Creeper. The easiest way is to get in close, then quickly back away as it explodes on its own.

How do you make a strong firework in Minecraft?

The standard Minecraft firework recipe calls for one gunpowder. Add up to two more to increase the Flight Duration stat.

Important: They need to be added in separate Crafting Table squares.

Now you know how to make fireworks in Minecraft. Go wild!

Why Do My AirPods Keep Skipping? 6 Effective Solutions!

What Streaming Service Has WE tv in 2023? The Top 5 Choices!