How to Screenshot on Windows — 8 Proven Ways

If you are a long-term Windows user, you must already know how to screenshot on Windows. But are you familiar with all the different methods? Windows has a range of built-in ways to take a screenshot, whether you want to capture your entire screen or only a portion of it. Below, we explain them all.

How to Take a Screenshot on Windows

Here are the main ways you can take a screenshot on Windows:

The simplest way to take a screenshot on Windows 10 and 11 is to press the Print Screen (PrtScn) key on your keyboard. This takes a screenshot of your entire screen.

When you press the Print Screen key, the screenshot will be copied to your clipboard, although you will receive no notification that a screenshot has been taken.

To view it, you must paste it into an app that lets you insert images, such as Microsoft Word or Paint. Then, click on File > Save as and choose the location where you want to save the screenshot.

If you want to back up your screenshot, you can also enable the option to save all the screenshots you take to OneDrive automatically.

Quick Note: To take a screenshot on some laptops, you may have to combine the Print Screen key with the function (fn) key.

When you press the Print Screen and Windows keys simultaneously, your screen will briefly go dim, indicating that a screenshot of your entire screen has been taken. On both Windows 10 and 11, the screenshot will automatically save as an image to the Screenshots folder, which you can find by opening This PC > Photos.

To capture a quick screenshot of only the active window you are working on, use the Alt + PrtScn shortcut. To use this method, select the window or the application you want to take a screenshot of to make sure it is in focus and press the Alt and Print Screen keys simultaneously.

The Snip & Sketch tool is the default screenshot app included in Windows 10. It is the best way to take a screenshot on Windows if you also want to edit and annotate the screenshot.

To capture a screenshot with the Snipping tool on Windows 10, use the following shortcut: Windows + Shift + S. This will launch a small toolbar at the top of the screen, where you can choose whether to take a rectangular, a free-form, a window, or a full-screen snip.

Here is what each of these options means:

After taking the screenshot, you will see a preview notification in the lower right part of your screen. Clicking on the notification will open the Snip & Sketch app, where you can customize and save your screenshot.

In addition, the screenshot will copy to your clipboard, so you can also view it by pasting it into Paint or a similar app.

In Windows 11, Microsoft has decided to replace the Snip & Sketch app with the Snipping Tool. This new version has been upgraded to auto-save screenshots, which means that all screen captures are automatically saved in the Screenshots folder. This makes it one of the best ways to take a screenshot on Windows 11.

The Snipping Tool shortcut for Windows 11 remains the same — Windows + Shift + S. When you enter this shortcut, your screen will go dim, at which point you can choose the type of snap you want to take — rectangular, free form, window, or full-screen snip.

After taking a screenshot, it will automatically be saved to the Screenshots folder and your clipboard. If you click on the pop-up notification in the lower right part of your screen that appears right after you take the screenshot, you can customize, annotate, and save your screenshot.

The Xbox Game Bar is a gaming overlay that comes bundled with Windows 10 and 11. It offers a range of features that improve the gaming experience and is particularly useful for taking screenshots and recording your screen while playing PC games. 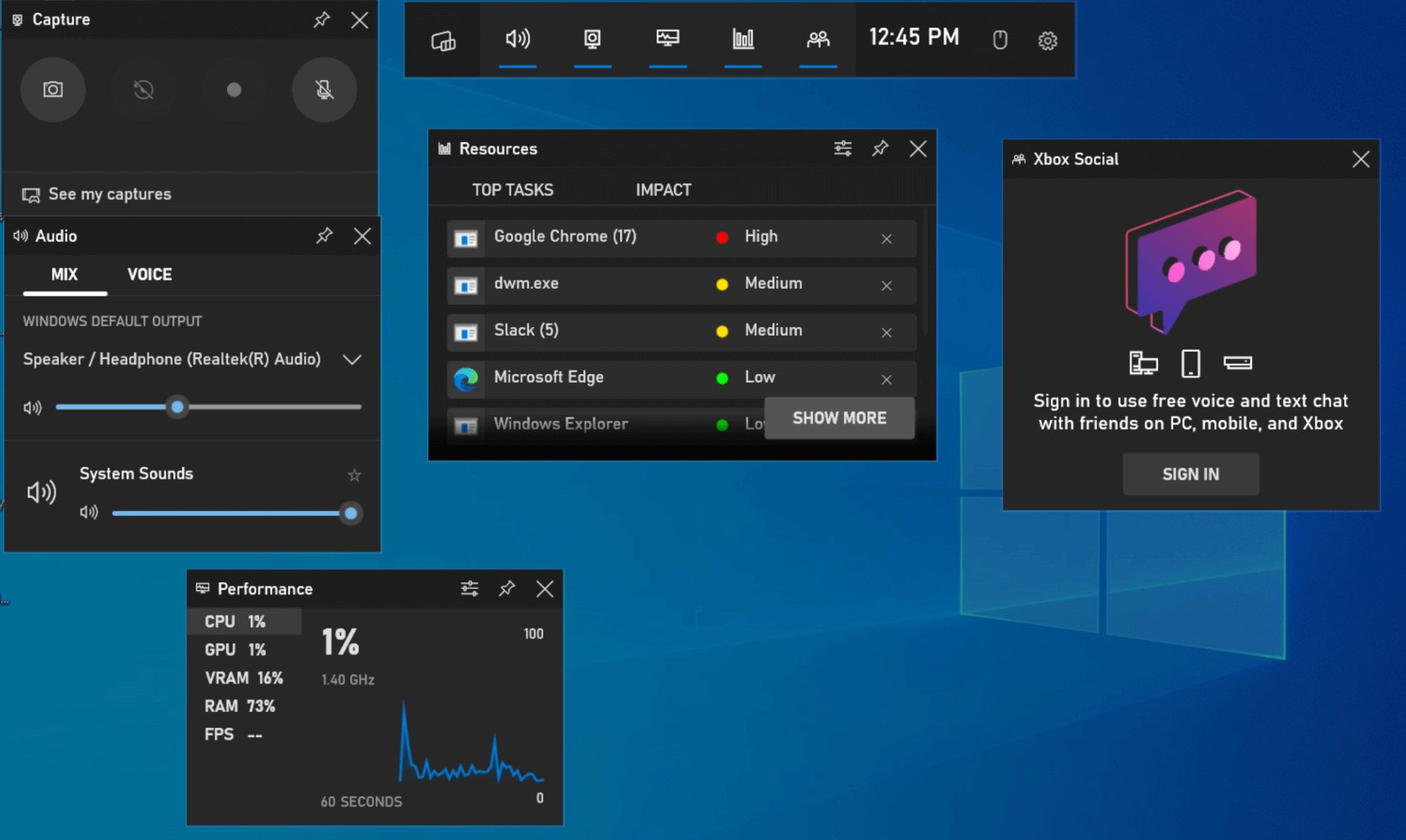 To open the Xbox Game Bar, press the Windows key + G simultaneously. Then, navigate to the Capture tab and click on the Camera button to grab a screenshot of your entire screen. Alternatively, you can use the default Windows + Alt + PrtScn shortcut to take a screenshot with the Game Bar.

In the Capture tab, there is also a Record button that you can use to take a video recording of your screen and an option to enable the microphone to record audio.

Any screenshots taken this way will be saved in the Captures subfolder, which is located inside the Videos folder on your PC. The screenshots will be saved in PNG format, and their file name will contain the name of the game or app you took them into and the exact date and time they were taken.

To take a screenshot on a Microsoft Surface laptop or tablet, you must hold down the power button, then press and release the volume button on the side of the device. As an indication that a screenshot has been taken, the screen will dim briefly, and the screenshot will automatically save to the Screenshots folder found in Pictures.

Note that this method doesn’t apply to older Surface devices. If you own a Surface 3 or earlier device, you must hold down the Windows key on the front of the device and press the volume-down button to take a screenshot.

Although Windows offers a lot of built-in methods to take a screenshot, you may want to try a third-party screenshot app to unlock some additional functionalities. Some of the best third-party apps for taking a screenshot on Windows are:

Lightshot is a free app that offers the quickest way to take a screen capture on Windows 10 and 11. When you download the Lightshot app on your Windows PC, it replaces the function of the Print Screen key and introduces additional features.

When you press the Print Screen key, you can take a screenshot of a selected area instead of automatically capturing the entire screen. You can then edit and annotate the screenshot, upload it to the server to instantly get its short link, and Google search for similar images.

Aside from the app, Lightshot is also available as a browser extension for Chrome and Mozilla Firefox.

Greenshot is an open-source screenshot app that offers multiple ways to capture a screenshot. You can use it to take quick snaps of a selected region, an active window, the full screen, and even capture a complete scrolling web page. With Greenshot, you can also easily customize, annotate, and obfuscate certain parts of your screenshot.

The screenshot app offers several ways to export your screenshots, such as save to file, copy to clipboard, send to printer, and upload to photo sites like Picasa or Flickr.

Snagit is the most feature-rich screenshot app for Windows. Its only downside is that it costs $62.99, which is relatively expensive, especially if you only want to take the occasional basic screenshot.

However, if you work with screenshots regularly, purchasing Snagit is well worth it, as the app offers a range of advanced features that you will not find in free screenshot apps. These include taking panoramic screen captures, making short screen recordings, creating animated GIFs from videos, and editing the text within your screenshots.

You can try out Snagit for free for 30 days to see if it fits your needs, but any screenshots you take during the free trial will be watermarked.

Despite having just about the same name with Windows’ most basic screen capture function, the PrtScr app offers much more functionality. It lets you capture full-screen, rectangle, freehand, and active window screenshots. It also saves screenshots straight to the desktop or any file you choose and allows you to send captured images by email directly within the app.

The app is entirely free and can be accessed by pressing the Print Screen button on your keyboard or any other custom key or shortcut you choose.

Windows offers multiple ways to take screenshots, depending on whether you want to take a screenshot of the entire screen, a piece of it, or only the active window you are working on. However, if you find any of these methods limiting, you can use a third-party screenshot app like Lightshot or Snagit to unlock any additional functionality you want.

Where do screenshots go on PC?

How to take a snapshot on Windows?

The best way to take a snapshot on Windows is to use the Snip & Sketch app that comes pre-installed on Windows 10 and 11. The app lets you take a rectangular, a free-form, a window, or a full-screen snip. It can be accessed with the Windows + Shift + S shortcut.

How to take a screenshot on a Windows laptop?