How To Split Screen on Mac

We need to multitask more often than not, and effectively doing so is ever so important.

A single app window is usually not enough, and going back and forth gets old quickly.

And let’s face it, when you’re on the go with your Macbook Pro, carrying even a portable monitor is not an ideal solution. Especially if you only want to have two apps active side by side.

For this reason, knowing how to split the screen on your Mac or Macbook will make your life much easier.

The function, called Split View by Apple, has been around for a while, but it hasn’t been the most obvious to figure out.

That’s where we come in.

Read on to make your multitasking life much easier.

How To Split Screen on Mac?

Using Split View on Mac is simple and requires only a few steps.

Depending on the macOS version, there are two slightly different ways of doing it. When writing this review, I used Mojave.

The one thing to remember about either of these is that the apps you want to split shouldn’t be in full-screen mode.

How to Split Screen on macOS Catalina and newer versions?

Can you Split Screen on an older Mac operating system?

As long as it’s running macOS El Capitan, Sierra, High Sierra, or Mojave, the below method will work. 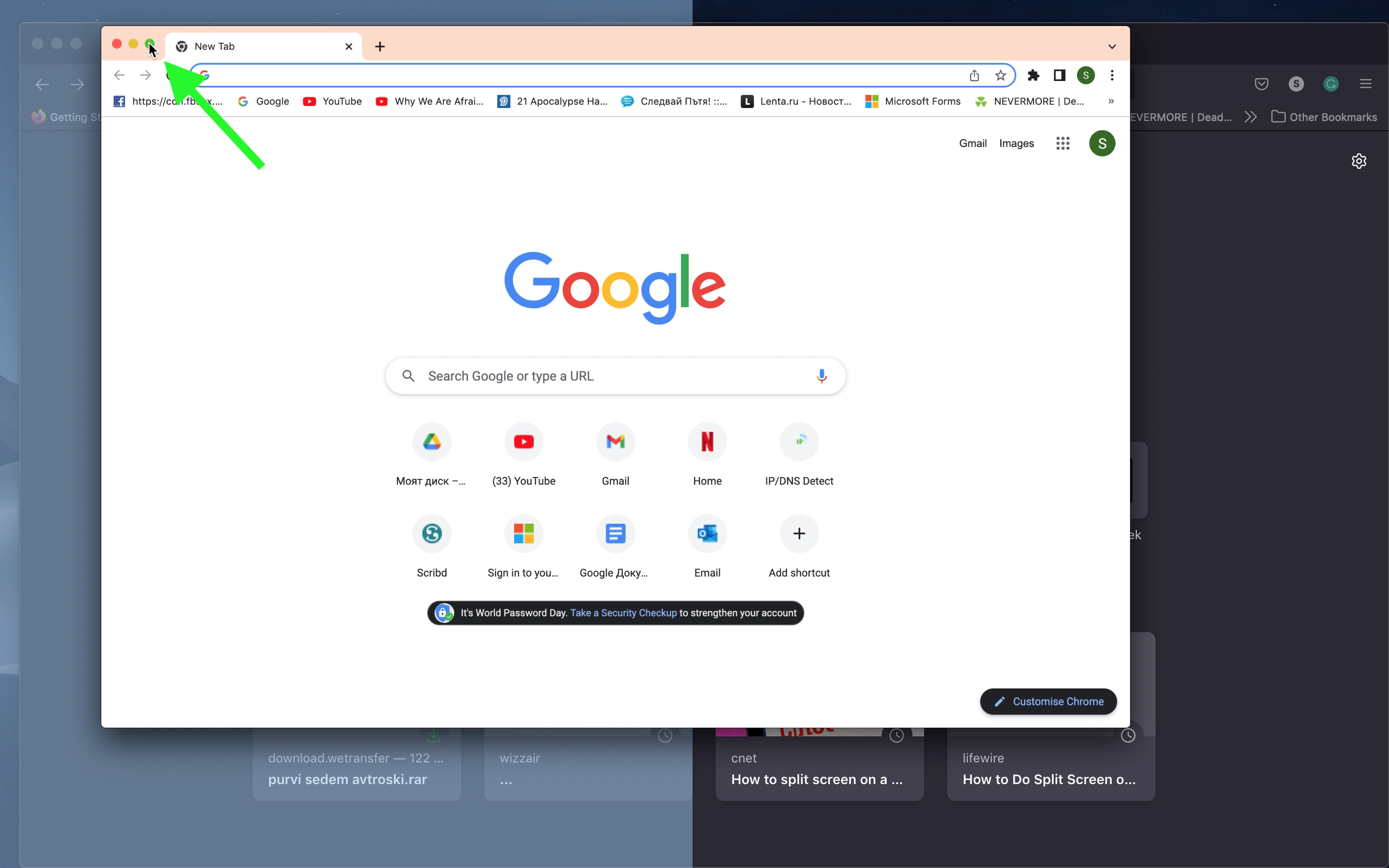 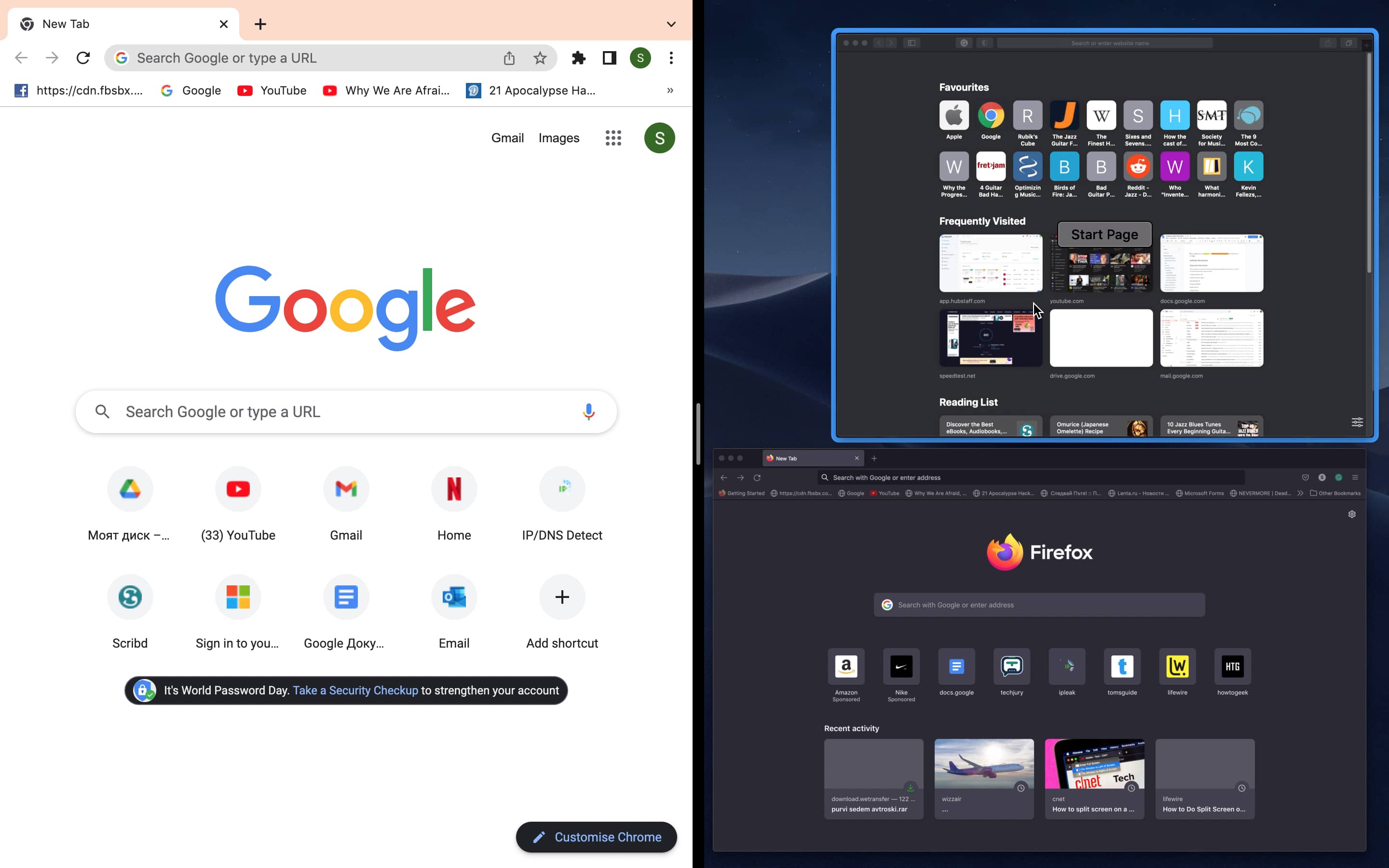 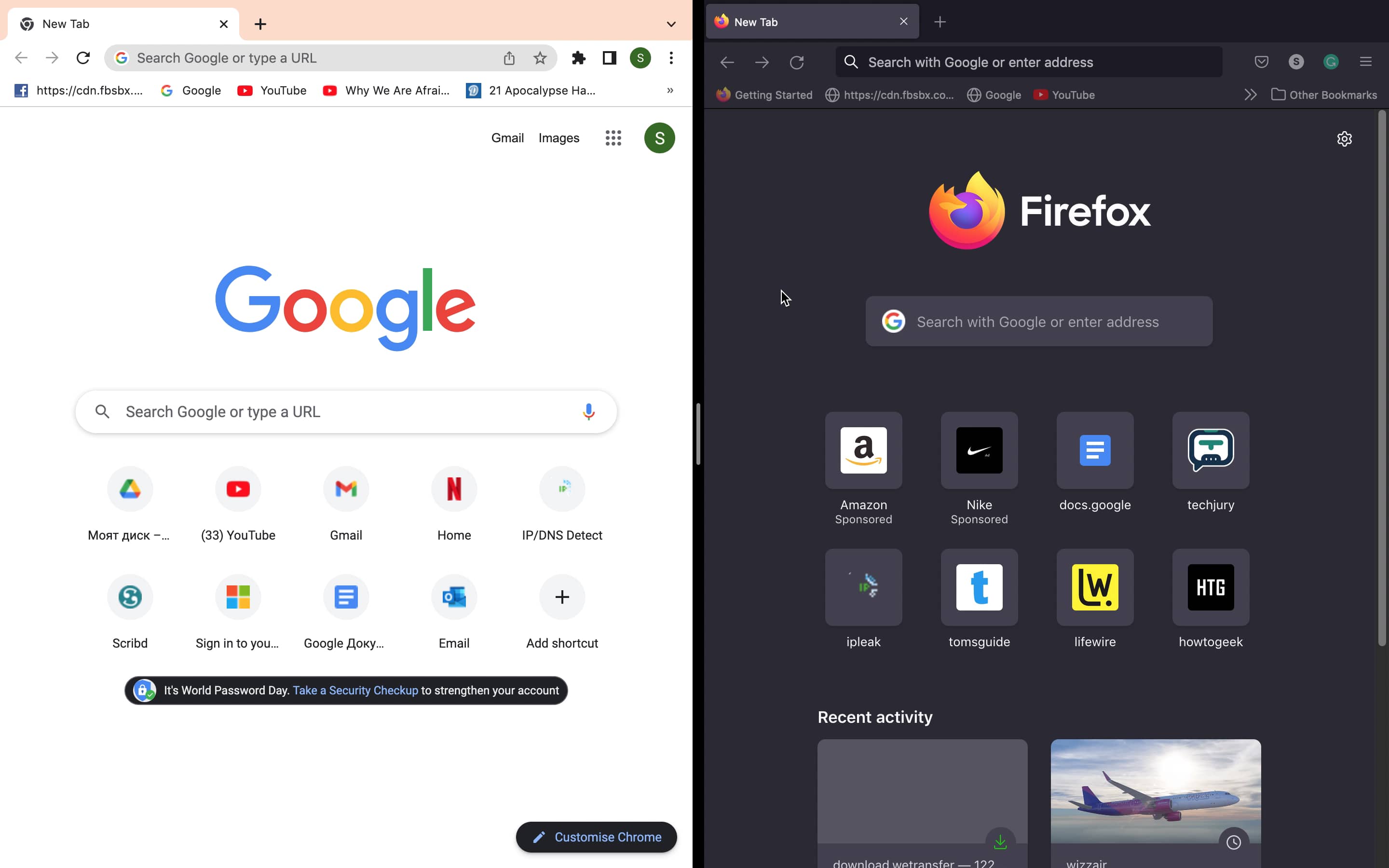 Now that you’ve seen how to do a split screen on your Mac, you can drastically reduce bouncing between apps.

For example, you can keep an eye on a chat window while making dinner reservations or have your Word document open while transcribing data from an Excel spreadsheet.

It makes the workflow much more convenient.

You can also have more than one instance of Split View.

This means you can use it to have two or three pairs of apps open or maybe even have browser tabs in side by side windows instead.

To switch between these multiple windows on a Mac, you can use the traditional ways:

Split View is one of those functions, which is good, but hasn’t lived up to its full potential yet, like lacking many customization options. 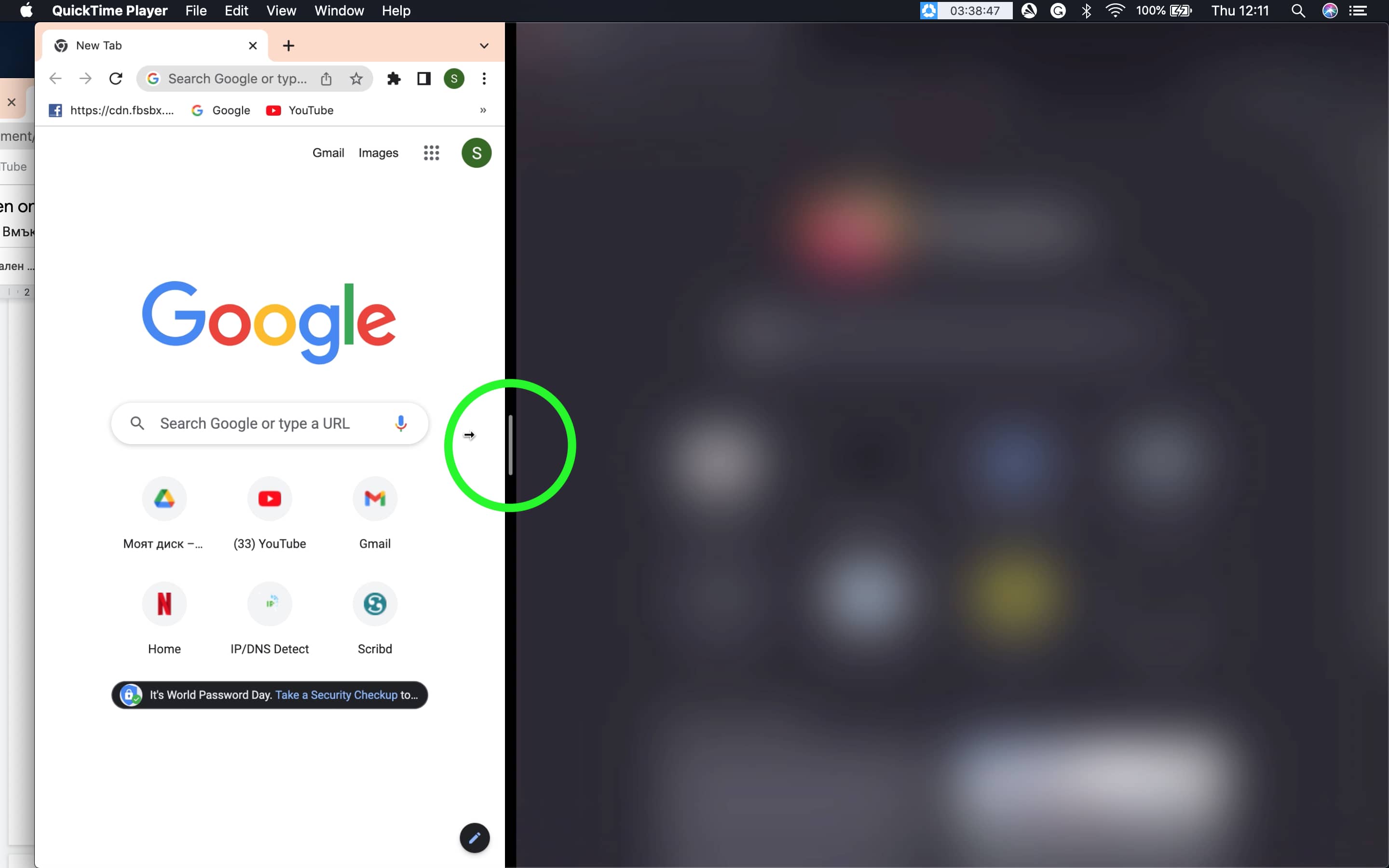 Since this feature essentially lets the Mac have two windows, side by side on a full screen, the Menu Bar hides as usual.

However, if you’re running macOS Monterey, you can toggle this option on or off. This is how to do it:

Exit A Split Screen On Mac

Once finished with your work, it’s time to exit Split View on your Mac.

Here’s how to do it:

Don’t worry about the second app disappearing. It’s just hidden as a full-screen window. To find it, simply use the switching options.

Additionally, if you wish to swap one of the two apps, you’d have to exit and redo the split screen process with the other one you want.

Why Won’t Mac Do a Split Screen?

Now that we know how to get a split screen on a Mac let’s troubleshoot a few reasons you might not be able to.

First, as mentioned above, you need to make sure the app you want to split isn’t in full-screen mode already. If it is, it won’t work.

You also want to confirm that you enabled the Displays have separate Spaces setting. To do this: 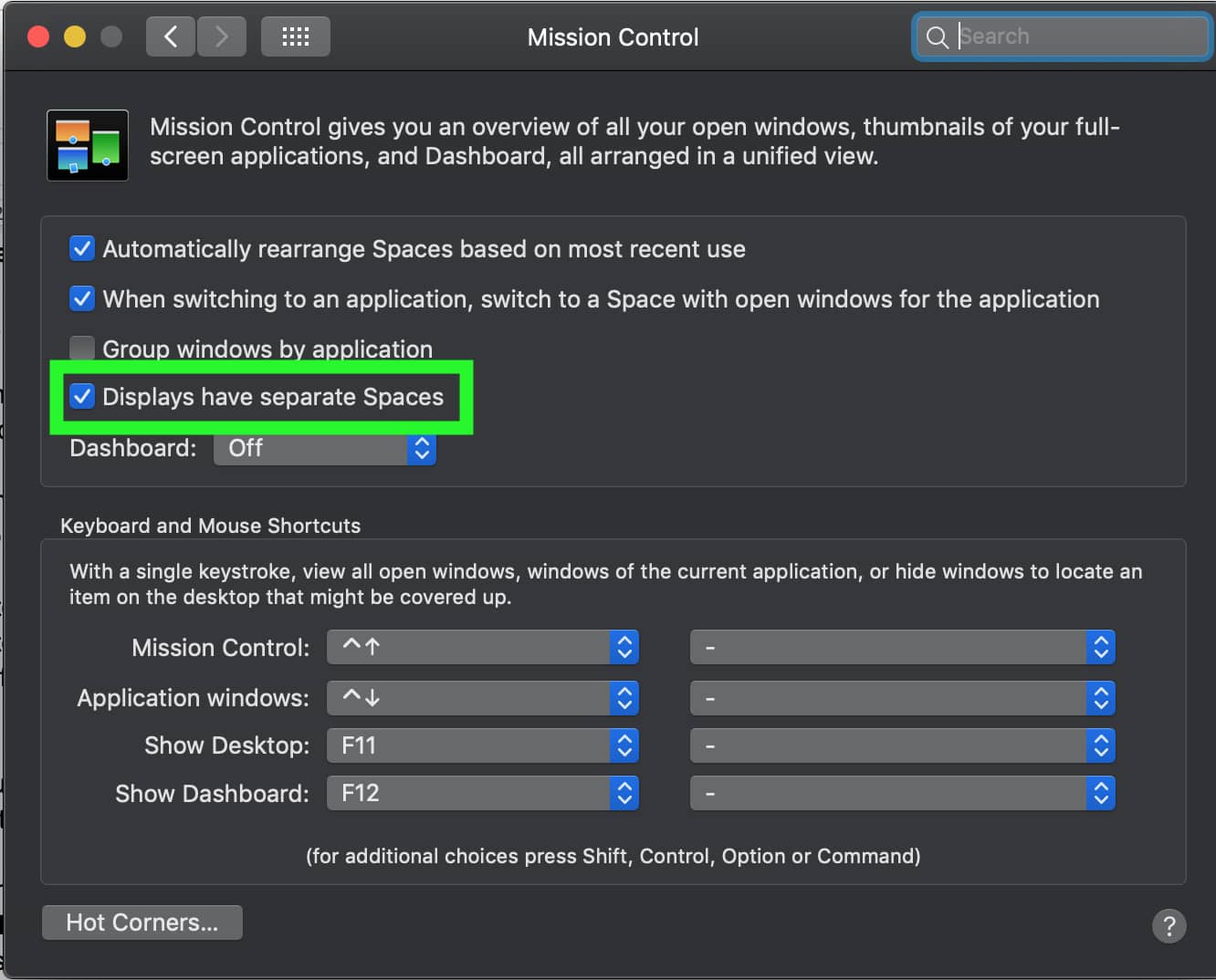 This option isn’t available if you’re running a macOS version older than El Capitan. In this case, you’ll need to update your system to a newer OS.

The last thing you should remember is that not all apps support side by side windows on Mac.

If the place where the green button is supposed to be, is blank or if it doesn’t have the tiny triangles inside, then the feature isn’t supported.

How Do You Split Screen On A Mac Without Full Screen?

If you’re not a fan of the full-screen mode of Split View, you always have the option to manually resize and arrange the windows on a Mac to your liking.

Although this method may not be the most visually appealing, it gives you the chance to fit three or four windows instead of only two.

Of course, if you’re trying this on your Macbook Pro, the display may not be large enough to accommodate as many windows.

What Is The Keyboard Shortcut For Splitting Screens On Mac?

If you’re one to remember keyboard shortcuts like a pro, you may be disappointed to learn that there isn’t a dedicated Mac split screen shortcut available.

However, there are still a couple of things you can do.

There is, for example, a semi-shortcut available: 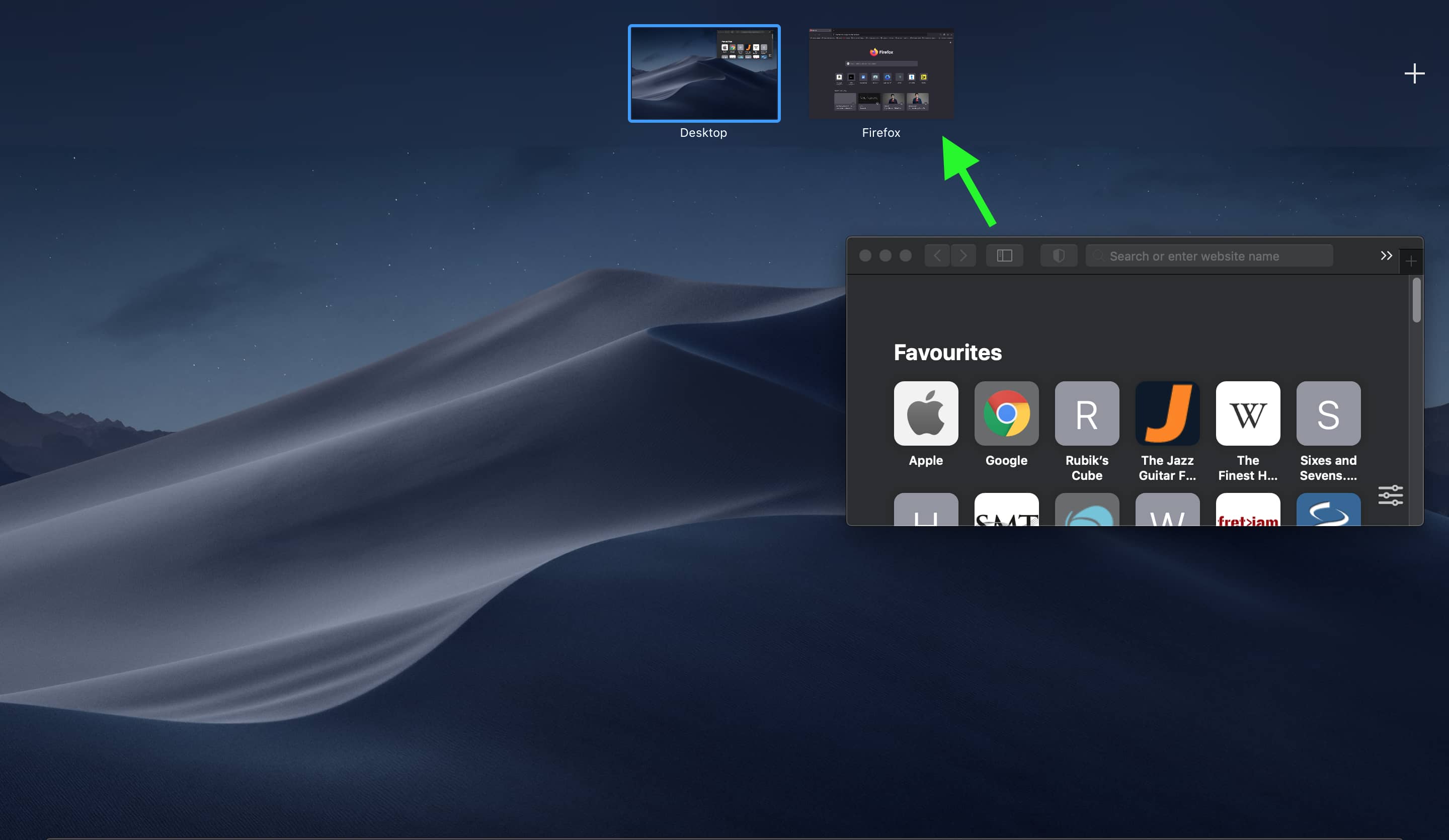 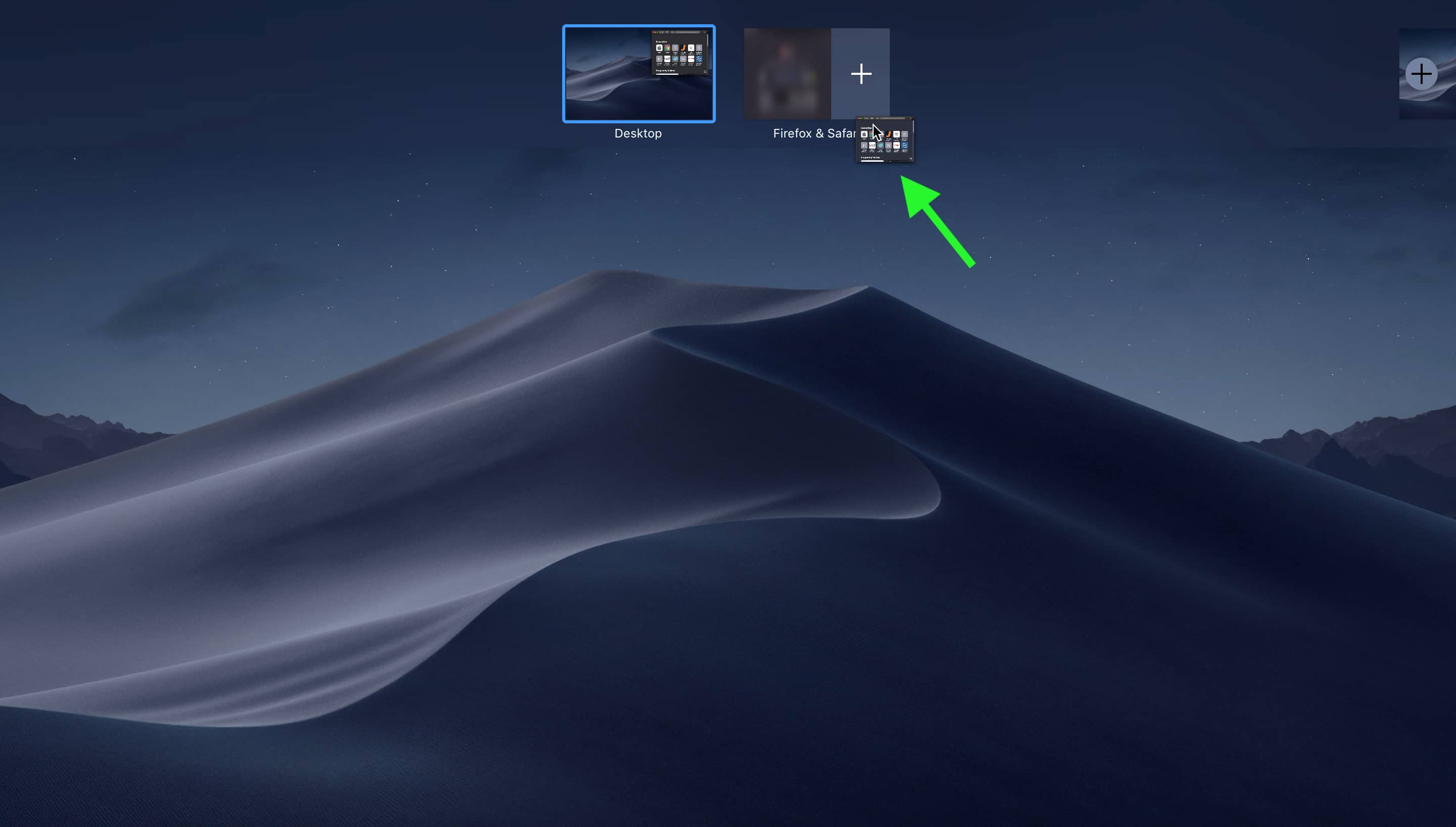 And if you’re using macOS Catalina or later editions, you can create a custom shortcut for Split View:

Figuring out how to split screen on your Mac may not be the most obvious process, but hopefully, you’ll find it’s far from being difficult.

Once you get used to it, multitasking on either your Mac or Macbook becomes a breeze.