How To Summon Torrent in Elden Ring [Quick Items and Pouch]

Since the riding system is one of the most challenging and entertaining parts of Elden Ring, you may have several questions about it. For example,  “How to summon Torrent in Elden Ring''? Gamers don’t start the game with this ability, but it can be acquired very early in the game. Read on to find out more.

What Is Torrent in Elden Ring

In Elden Ring, Torrent is a spirit steed, which is basically a fancy horse with horns for players and is a major part of the gameplay.

He is a trusty companion mount during combat, travel, and exploration but cannot be taken into the various underground dungeons or castles. A low blue light at the foot of entrances glows in areas where you cannot use Torrent.

How to Get Torrent in Elden Ring 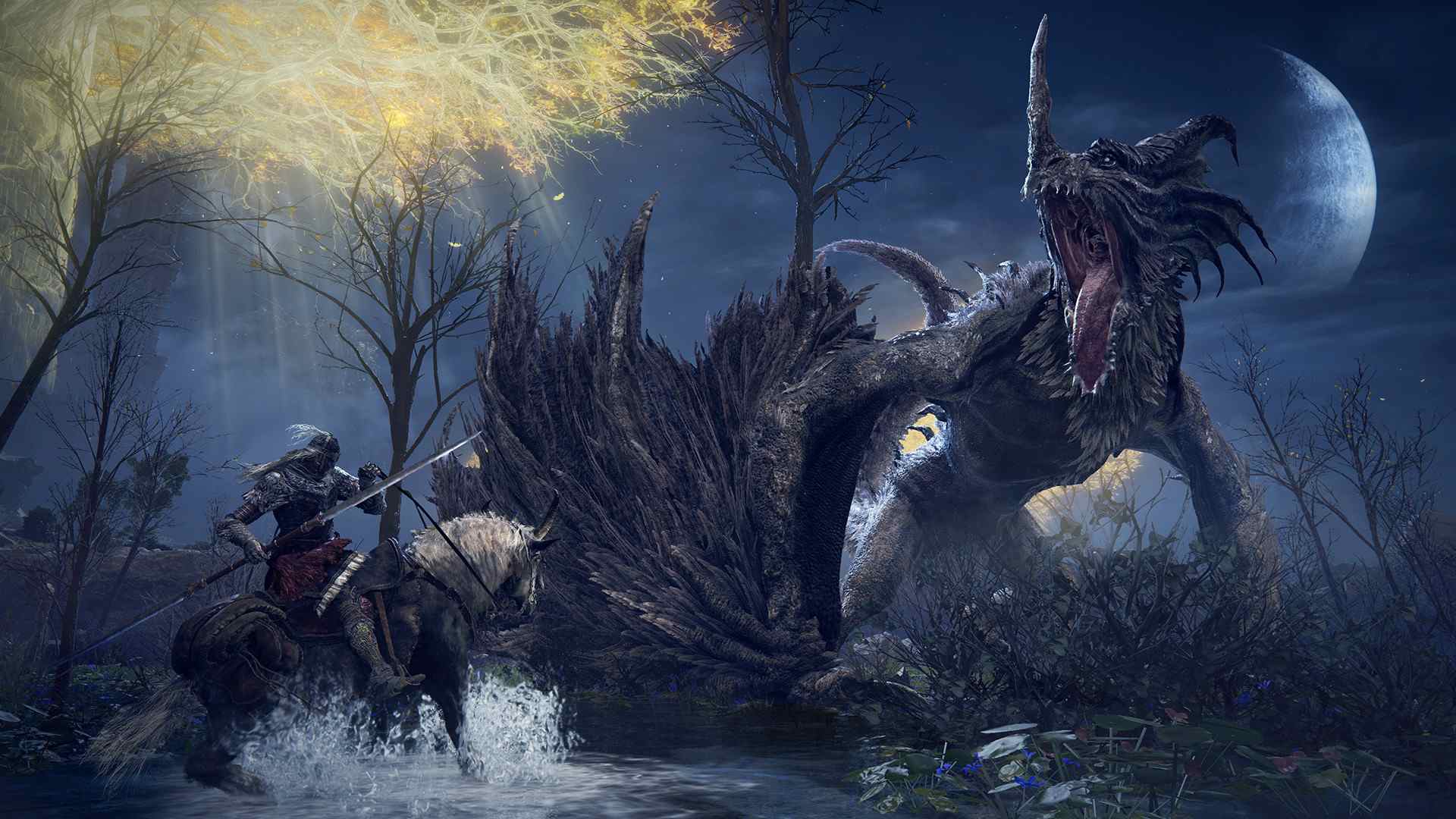 Fortunately, you can get Torrent at the start of the game from Melina near the beginning of your journey. Follow these instructions, so you don’t miss out:

This loyal friend doesn’t just help you get between Sites of Grace quicker; he can also get over obstacles with a double jump and help you out in combat.

Players should try to fight many bosses and other formidable enemies in the game on horseback, including all of the dragons and mounted knights. It is especially useful when trying to close the distance between you and an enemy.

Once you have Torrent, remember that he can both run and jump. Since he has a second jump charge, he’s better at platforming and climbing than your character.

How to Summon Torrent 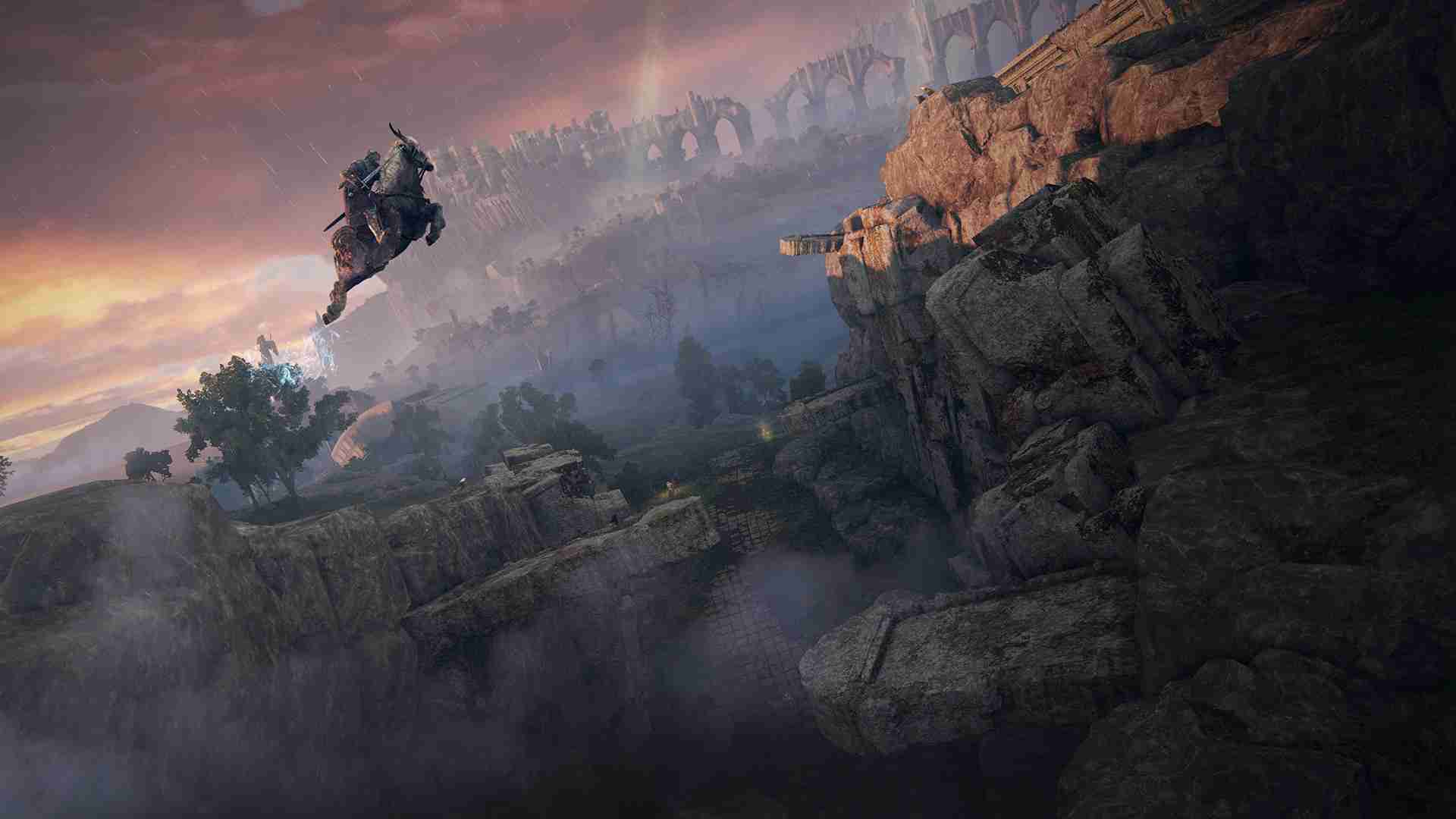 Summoning Torrent in Elden Ring can be done either though the Quick Items or Pouch, depending on where you choose to equip the Spectral Steed Whistle. 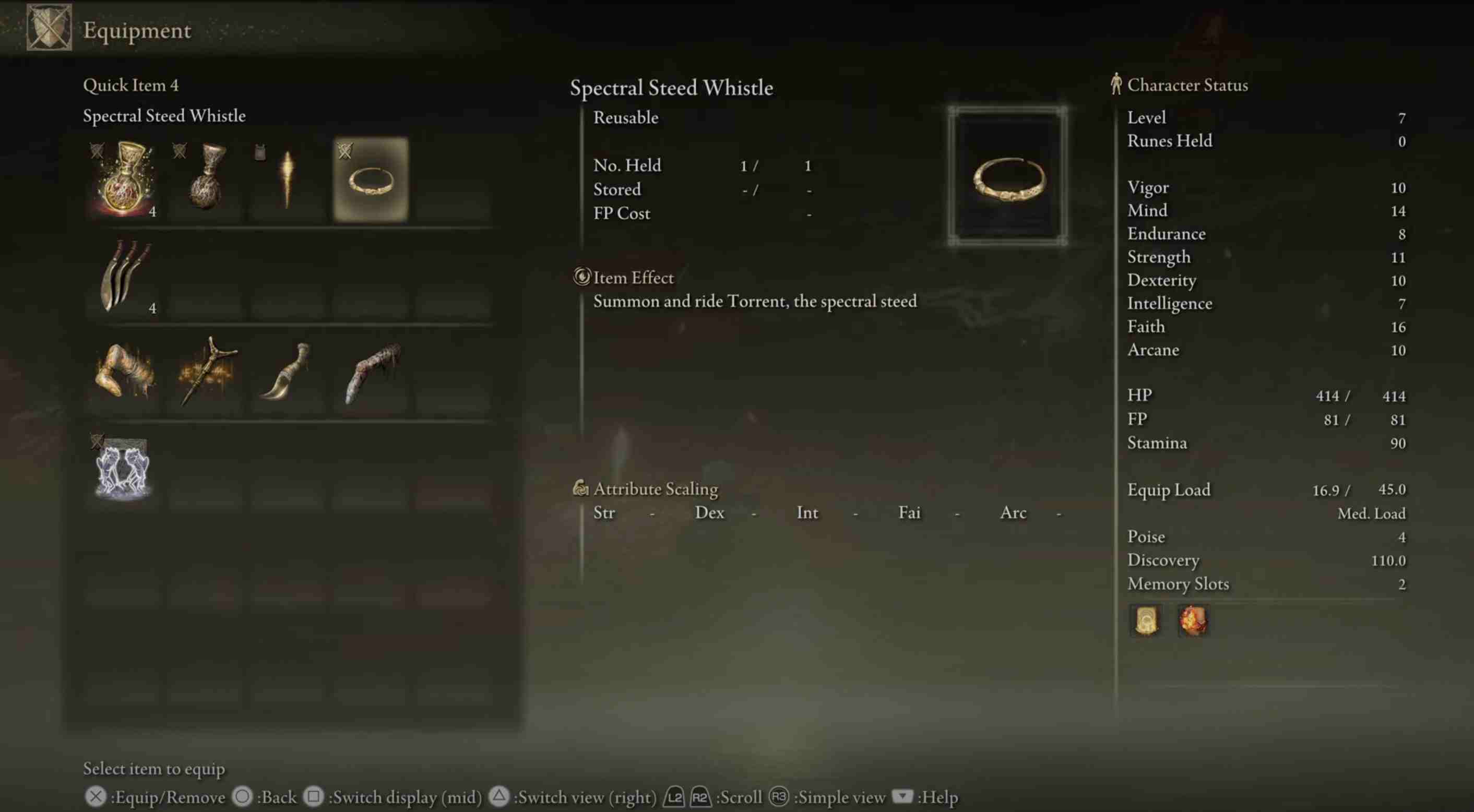 Summoning Torrent through the Pouch

How to Heal Torrent?

To heal Torrent before he dies, you can use Rowa Raisin or Sweet Raisin while on horseback. You can craft these items with the Crafting Kit, which you can obtain from Merchant Kale in Limgrave at the Church of Elleh. Rowa Raisin can be easily crafted with a single Rowa Fruit.

You should equip the Rowa Raisin item in the Quick Items or Pouch as well so you can access them faster. 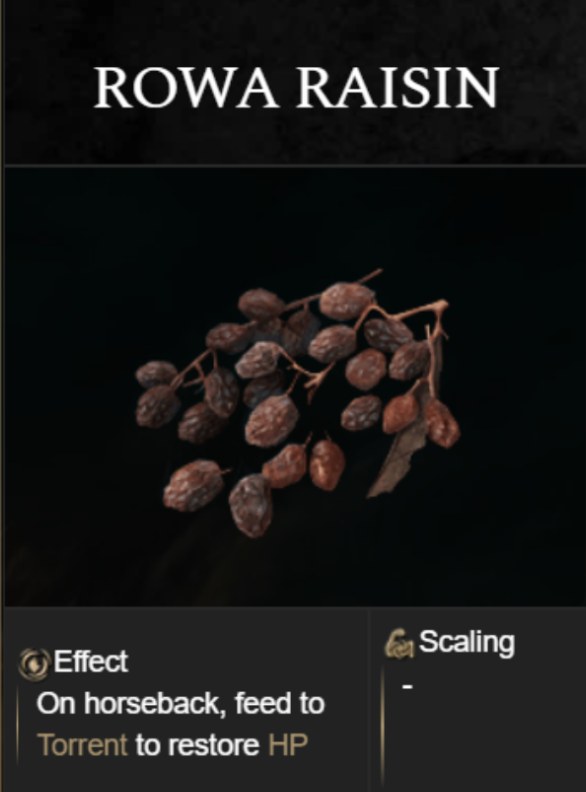 If you don't heal him in time, Torrent can actually die; if that happens, you must either rest at a site of grace for him to resurrect or consume a Flask of Crimson Tears to revive him.

Additionally, Torrent can get stance-broken which won't kill him but you will get thrown off of him. In such situations, you can resummon him at no cost. 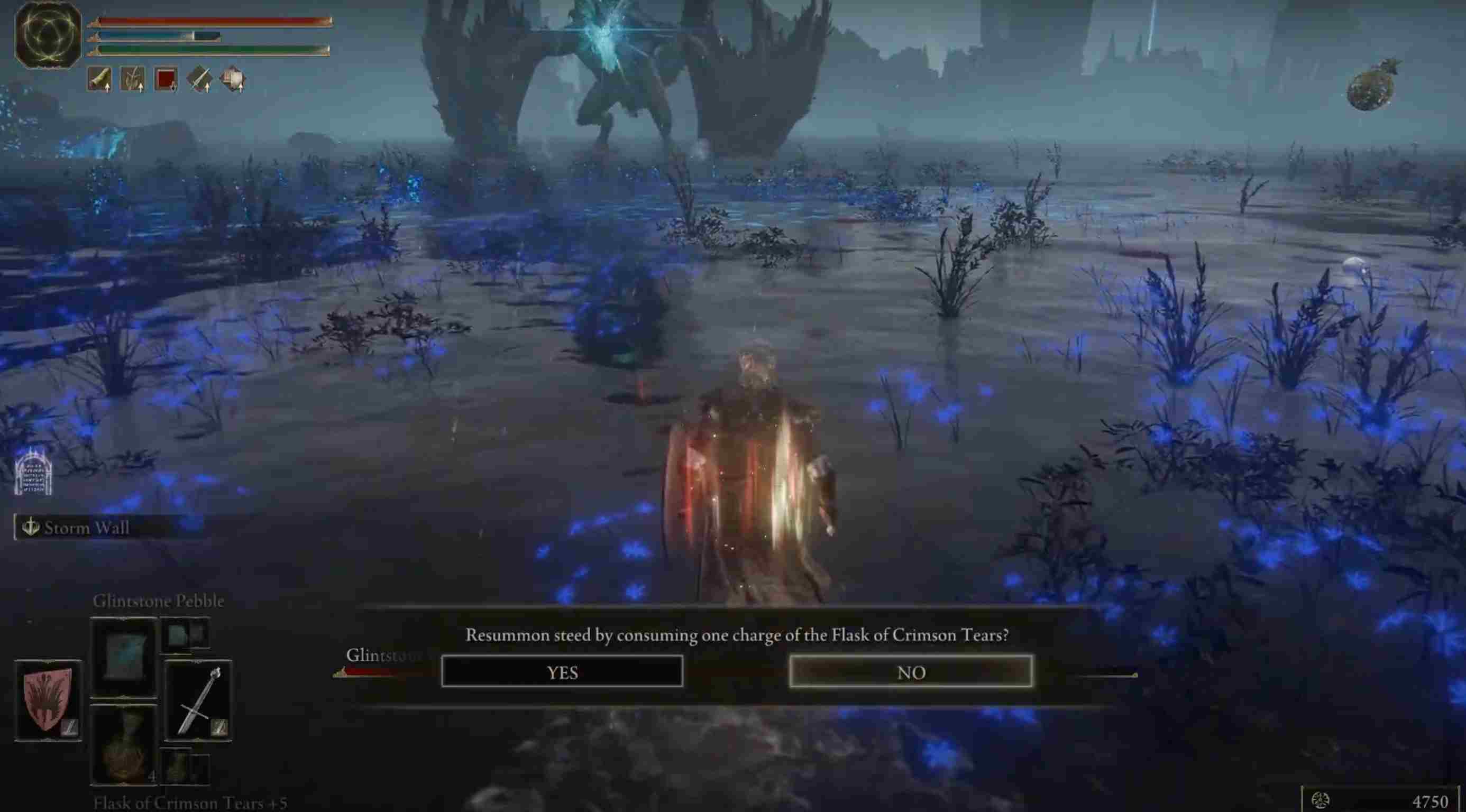 Pictured above: a text prompt asking if you would like to consume a charge of Flask of Crimson Tears to revive Torrent after he's been killed.

Where Can You Summon Torrent, and What Are the Exceptions?

It’s possible to mount Torrent almost everywhere except in most caves, dungeons, and castles. Remember that you can summon Torrent in battle, which is advisable in many scenarios.

You don’t need to face some of the giant beasts you encounter in the game alone since, sometimes, it’s easier to beat them from horseback. It's especially good when you want to close the distance between you and an enemy.

Running away on horseback is easier, too, so if you’re not quite ready for that dragon fight yet, Torrent can help.

It's important to note that you cannot summon Torrent during PvP, Invasions, Dueling and any other multiplayer session.

If you're riding Torrent in the open world and he just randomly disappears and you get dismounted, get ready for a red phantom Invasion.

Why Should You Use Torrent in Elden Ring?

The main reasons why you should use Torrent in Elden Ring are:

Traversing the Lands Between

You should use Torrent to run faster, jump farther and explore the Lands Between easier. Torrent’s walking speed is like your character’s running speed. He jumps further than you can and can even double jump.

You’ll become very fast if you sprint while riding Torrent, and sprinting is an essential part of Elden Ring. To sprint, you must use the same input as running on foot.

That’s not all, though. While galloping in the Lands Between, you’ll encounter Spiritsprings, large spinning columns, usually located near cliffs.

While riding Torrent, you can jump into a Spiritspring to ride it into the air or use the currents to land safely from great heights. Even if you jump from very high, you’ll land near a Spiritspring without taking fall damage. 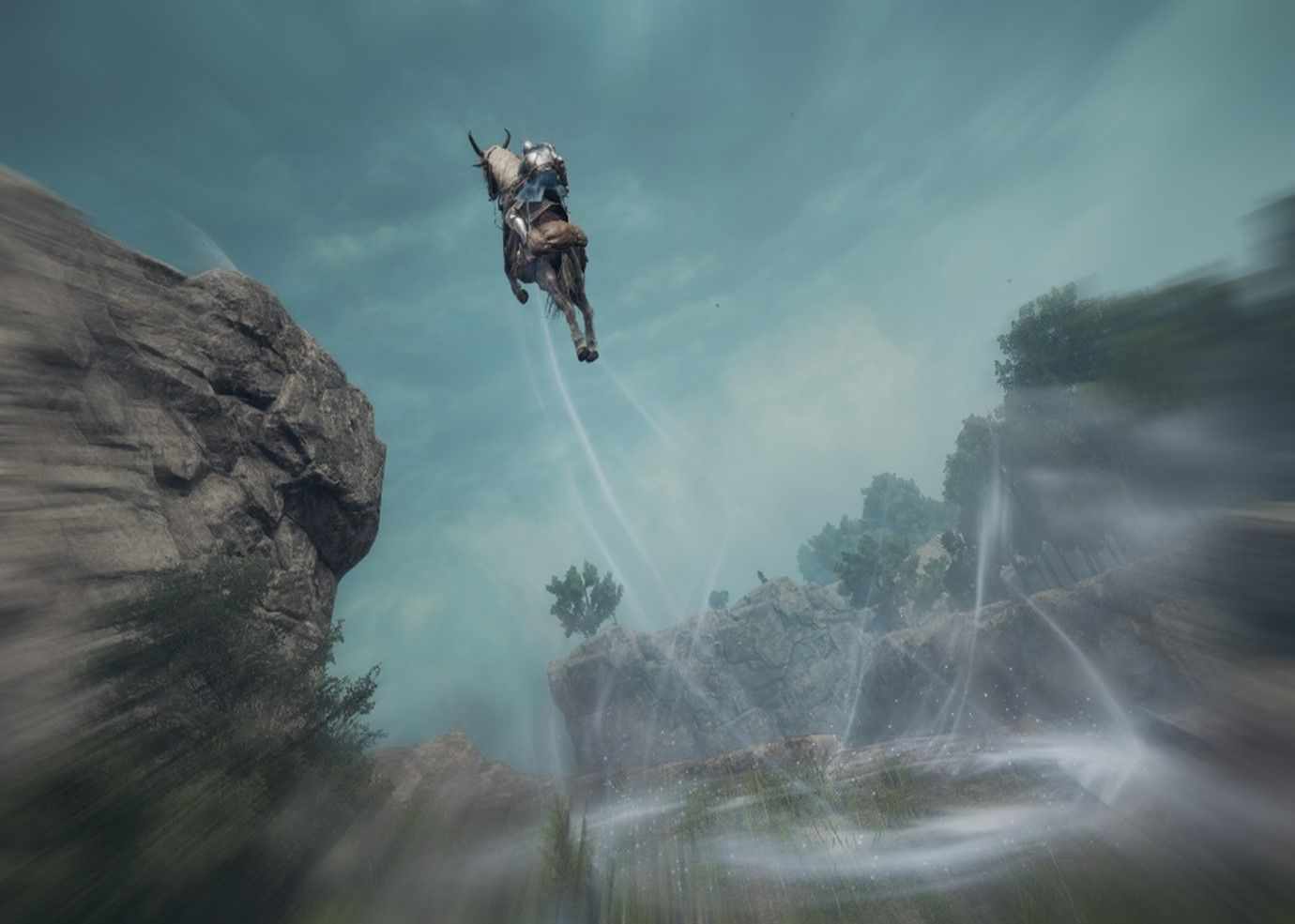 The only way you can double jump is while riding the Torrent. Players should press the jump button once for a regular jump and press it again in the middle of the leap to do a double jump. This is excellent for reaching inaccessible locations and avoiding attacks during combat.

Attacks on horseback are much different than the ones on foot. Remember, you can hold and use one weapon on horseback during combat. However, you can switch it between hands.

You can use the L1 and R1 or LB and RB buttons to attack the left or right side of Torrent with regular attacks, or use L2 and R2 or LT and RT to do a heavy attack, which is a downward and upward slash if you're weilding a straight sword.

You can also use Sorceries and Incantations while on horseback, but you won't be able to sprint in the brief casting period.

Skilled players can use Torrent to avoid many attacks that would be tricky to dodge on foot.

Now that you know how to summon Torrent in Elden Ring, you’re ready to take on all the challenges that the Lands Between have to offer. Good luck on your journey, Tarnished One; you’ll need it!

Who gives you Torrent in Elden Ring?

You should speak to Melina at Site of Grace, accept her offer to become your maiden, and she will give you the Spectral Steed Whistle, which you’ll need to summon Torrent.

How to call Torrent in Elden Ring?

You can call him by using the Spectral Steed Whistle.

How to feed Torrent in Elden Ring?

Torrent needs Raisins to heal during combat. Read our guide above for more details.

How to summon Torrent on the PS5?

If you’re wondering how to summon Torrent in Elden Ring on the PS5, the process is the same as on the other gaming platforms. Once you meet Melina and receive the ring Spectral Steed Whistle, simply use it to Summon your faithful steed.