20 Stunning Metaverse Statistics for 2023 You Need to Know

Imagine going to Rihanna’s concert without leaving your home.

You just need to have the appropriate tech to enter the metaverse and boom - you’re listening to Rude Boy.

Bet you didn’t realize all the opportunities this new world will bring. So, I have prepared the latest metaverse statistics, which I’m sure will blow your mind.

First, we need to discuss how big this phenomenon is:

In his novel “Snow Crush” Stephenson creates a world, called the “metaverse” that others can enter by using VR goggles. People could create characters like avatars and go shopping, traveling, etc.

Thirty years later, his idea is becoming a reality thanks to the metaverse applications.

Web 2.0 metaverse companies are estimated to have a total market capitalization of 14.8 trillion U.S. dollars since October 2021. This number includes only those that have a significant revenue and not the smaller ones that also work in this field.

The current Internet (Web 2.0) we use is centralized and increasingly structured. The new version - Web 3.0 - can shift the power by allowing the users to be in charge of their data. This will make it decentralized and more transparent.

However, this new concept of virtual worlds is growing and fighting for the attention of people. 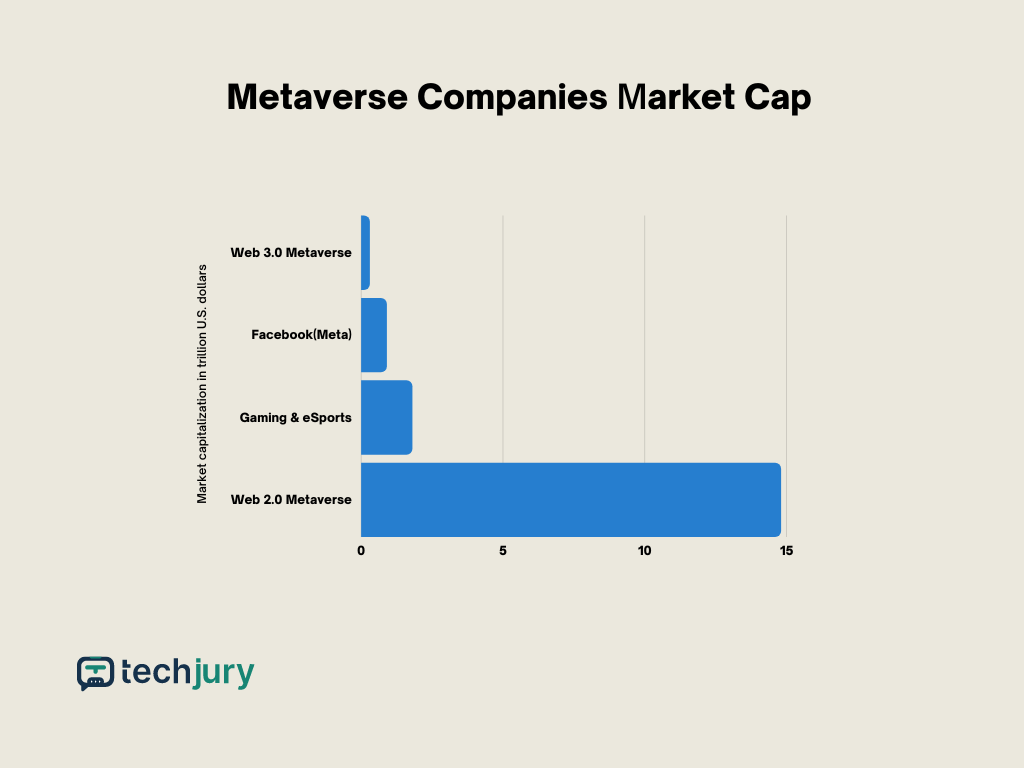 4. Metaverse applications developed at a quicker pace during the COVID-19 pandemic.

In a Statista survey from March 2022, 92% of businesses that have already invested in the metaverse reported that the COVID-19 pandemic speeded up the development.

Furthermore, 4 out of 10 respondents said that they are searching for ways to start work projects remotely in the metaverse. 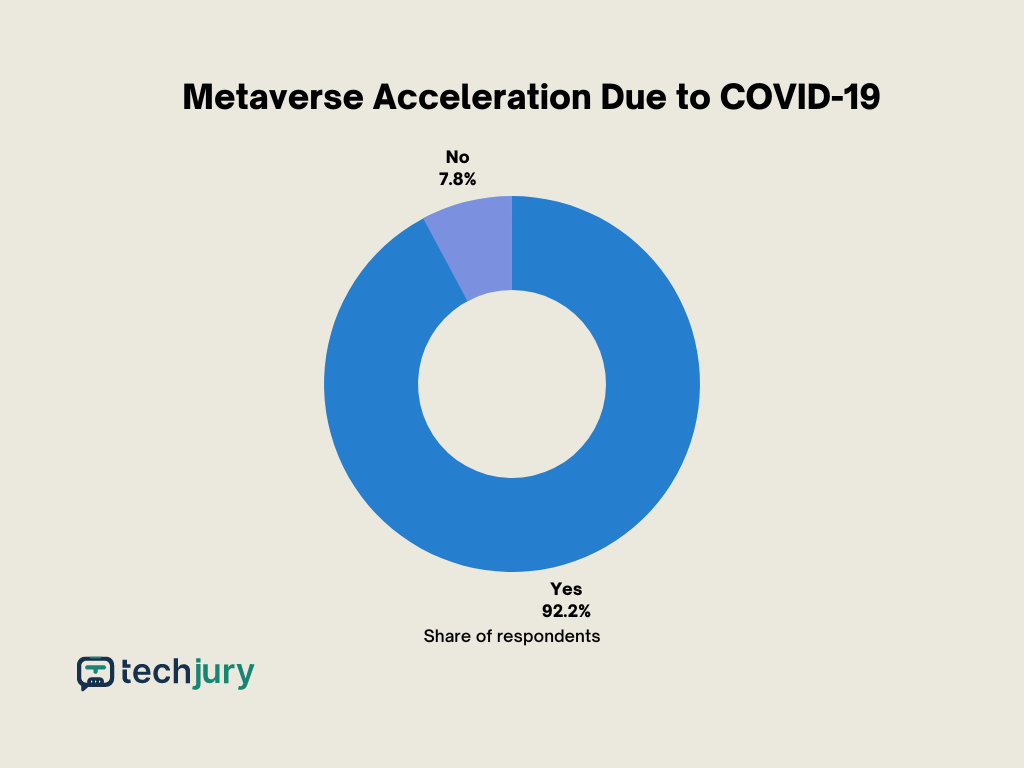 This will be the result of the increased interest in gaming, VR, and AR and the way these new technologies develop in the future.

The investment bank Citi claims that the metaverse has a potential of $8 trillion to $13 trillion by 2030.

That would mean that the number of metaverse platform users may increase up to five billion if the mobile phone user base is included.

The social media giant Facebook opened up discussions about the metaverse when it changed its name to Meta. But that’s just the tip of the iceberg.

7. Facebook invested $50 million in funding groups that are non-profit in order to develop Metaverse.

Facebook saw the possibilities the metaverse has to offer when they bought the virtual reality headset maker Oculus in 2014. They started to invest in the development of their metaverse division with funds reaching more than $10 billion in 2021.

Moreover, Facebook wants to demonstrate that it is developing metaverse responsibly by funding non-profit groups with $50 million.

For the purpose of shaping their metaverse, Europeans will play a vital part for Facebook officials. Last year it announced a plan for opening 10,000 high-skilled jobs in the EU over the next five years.

9. Zuckerberg predicts that one billion people will spend a lot of money in the metaverse.

Zuckerberg envisions metaverse platforms as places where people will spend hundreds of dollars for their avatars who communicate with each other. They will buy and sell digital goods thanks to the hardware and software Meta is planning to release pretty soon.

Since the metaverse is a virtual universe it is also a place where people can own virtual properties just like any other real estate.

Below you can read some metaverse real estate statistics:

If you want to buy a virtual plot of land you need to pay around $2000. However, the metaverse land price might increase in the future because people are becoming more interested in joining it.

The more land you own the wealthier you can become. You can rent that property and get money from other users.

11. The largest transaction with metaverse real estate was the $5-million-purchase of 19 properties.

In May 2022 Curzio Research concluded a deal with TCG World and became the owner of 19 properties for $5 million. That is one-quarter of the 10 biggest transactions combined whose value is $20.6 million.

12. $1.9 billion has been spent on virtual land in the top ten virtual platforms.

Since the beginning, the ten largest metaverse platforms have earned almost $1.9 billion from real estate sales.

There are forecasts for an increase of $5.37 billion by 2026. However, the interest for buying virtual land has decreased recently.

I’ve got you covered,

13. There are nearly 60,000 users that “visit” these virtual worlds actively and 32% of them enter this virtual space daily.

The metaverse became extremely popular and since 2020 the number of active daily users has increased slowly but steadily.

People are becoming interested in this virtual space where they can interact and collaborate. Although it is a developing concept many businesses see the possibilities for work as well.

The three biggest metaverse titles are Fortnite, Minecraft, and Roblox.Their users are very young with the average player being a 27-year-old male. This means that metaverse gamers are considerably younger than traditional game-players (a 38-year-old).

In addition, Gen Z metaverse statistics show that younger generations are more immersed in digital gaming with 38% of users aged 10-20.

15. 41% of adult Americans will join the metaverse in order to experience things they can’t in physical reality.

41% of people stated that in the metaverse they can do things that are not possible in reality.

Moreover, 38% of American metaverse platform users believe that it is a place that can bring people closer in a positive way.

23% of respondents see the metaverse as an opportunity to change themselves and become a better version than they really are.

16. 36% of online adults in the US are interested in using the metaverse.

Although 36% of online users are interested in entering the metaverse (12% of them are very invested), a considerable percentage of users are not interested at all (43%).

In terms of gender, men are more interested than women. Exactly half of the females show no interest in the metaverse.

17. In five years, American users are expected to spend four hours daily in the metaverse.

According to metaverse growth statistics, Gen Z and millennials expect to spend close to five hours a day. It is interesting that older generations, Gen X and Baby boomers, are almost just willing to spend time in the metaverse, with 3.6 and 1.8 hours per day, respectively.

Okay, but what does the future hold?

18. 54% of technology experts believe that the metaverse will be part of the everyday life of people.

Pew Research Center has asked more than 600 experts about the metaverse trajectory by 2040.

They were divided in their opinions. 54% were convinced that half a billion and more people worldwide will fully experience the metaverse in their daily life by 2040. The other 46%, however, don’t have faith in its potential.

19. By 2026, one-quarter of the world population will be engaged in the metaverse.

It is not only Facebook that has taken this road. According to metaverse stats, in only four years from now, 25% of the people worldwide will spend at least an hour in this alternative universe daily.

20. 64 million Americans are expected to use virtual reality this year.

Among the most interesting metaverse predictions is that by the end of this year 64 million Americans will use virtual reality.

We can expect the current metaverse publicity to be translated into suitable products and services.

Just think about all the exciting opportunities this brings to the table!

Dunno about you, but I’ll try and see if I could fly in the metaverse for sure.

How many metaverse platforms are there?

There is one metaverse and more than a hundred metaverse platforms that function as bridges between the virtual and the real world. They help developers to create virtual experiences with new technologies.

Will the metaverse succeed?

The stakes are huge. Right now, it all seems glorious and experts’ predictions sound good, but truth is - only time can tell.

How many people are in the metaverse?

The metaverse is still in progress and many people are not familiar enough with this concept. However, according to most metaverse statistics it is expected that by 2026 one in every four people will be visiting this alternative world for an hour daily.

How Long Does HD Processing Take on YouTube in 2023?

Why Can’t I See Comments on YouTube? 8 Reasons & Solutions