21 Tablet Statistics and Facts You Need To Know in 2023

This is especially true for smartphones, which practically everyone has nowadays.

But what about tablets?

They’ve come a long way since the release of the first iPad in 2010. It was a game-changer, and soon after, other companies started releasing these devices.

But are they relevant today?

This article introduces you to some interesting tablet statistics that reflect on its popularity.

To spark your curiosity, here are our top choices.

Let’s further explore these exciting facts about tablets and discover many more.

Often handy, it's bigger than a phone and smaller than a laptop. It’s perfect when you want to get work done on the go, and that’s why more than 1.28 billion people prefer them.

2. Apple iPads are the most used tablets worldwide.

Since Apple introduced its first iPads, it has remained on top with 23.4 percent of worldwide sales. For example, tablet sales statistics show that in 2021, it sold a leading 57.8 million iPads. 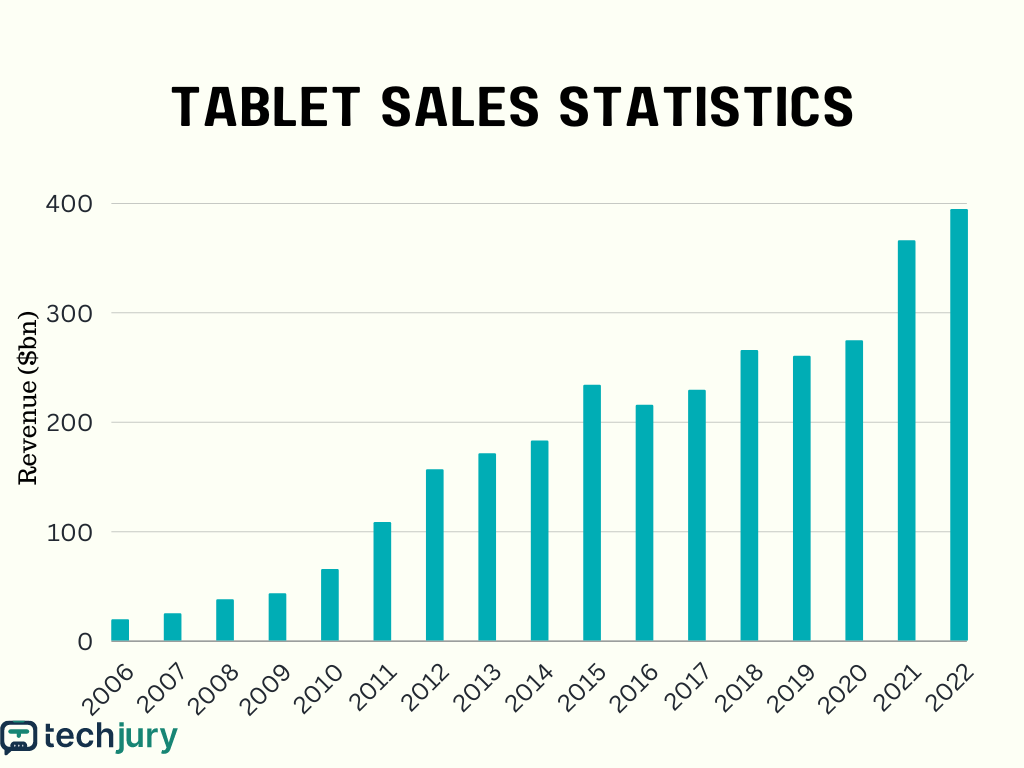 Although this sounds like a lot, it decreased from the 230 million units shipped in 2014.

4. People mostly use this type of device for email.

The most widespread use of these devices is sending and receiving emails. 54% of people use their tablets mainly for this. Other popular ways people use their devices are reading the news and social networking.

5. The US has the largest market for tablets.

Statista’s tablet stats show that one-third of annual deliveries belong to the US, with around 22% of worldwide shipments. Next on the list is Western Europe with 21%.

That’s a lot, huh? Unfortunately, predictions show revenues will decrease by 2026 to $56 billion.

7. The average lifetime of tablets in the US dropped from seven to around five years.

The lifespan of smart devices dropped from seven years in 2019 to around five years in 2021.

The average lifespan of Apple iPads is around five years. Apple provides software updates for up to 10 years, while iPads’ hardware capacity often maxes out at five.

Android devices provide software updates for 2 to 3 years, and their hardware capacity can last up to 5 years. 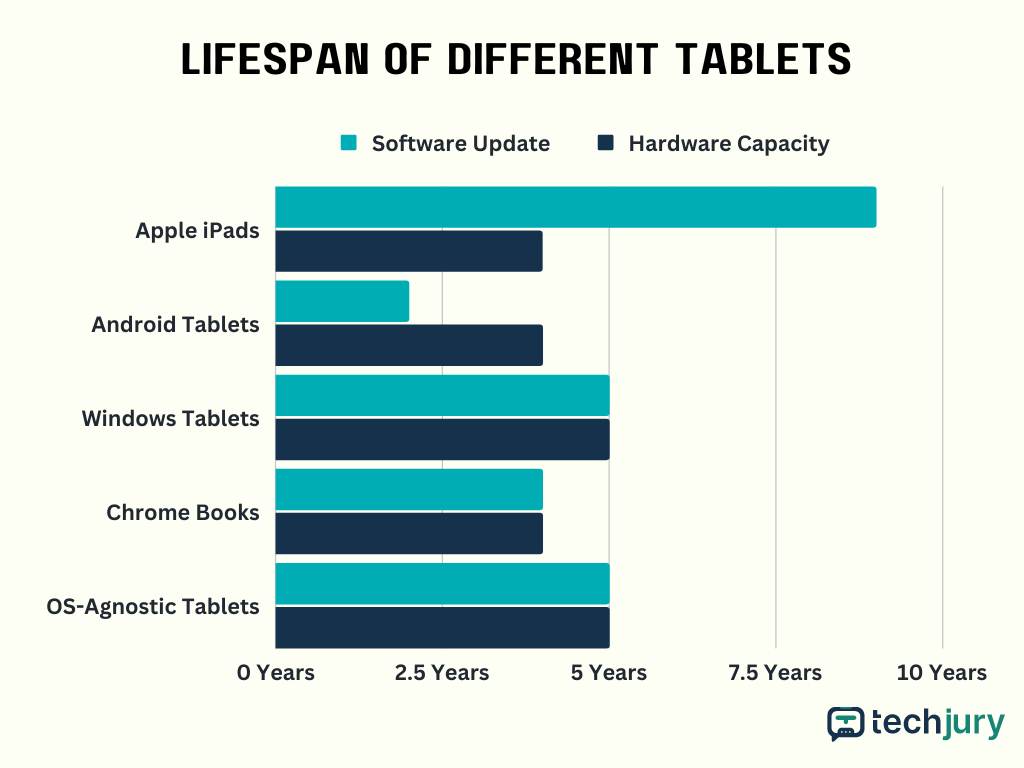 Here are some facts that provide further market insights.

Even though smartphones are more popular, there is still a market for these larger devices. Comparatively, this is an increase from the $60 billion in global revenue in 2021.

9. In 2021, statistics show that around 168.8 million tablets were shipped worldwide.

Deliveries peaked in the last quarter of 2021 with over 52 million units. 14.7 million iPads were shipped, with Samsung following up with around half of the iPad quantity.

With Apple holding the top position in tablet market share, it’s no surprise that almost 60% of all the tablets in the US are iPads. Amazon is next on the list with 17.5%, and then comes Samsung with 13%.

11. Less than 3% of the global market share belongs to tablets.

Statistics show that people prefer using mobile phones and PCs over tablets. The former leads in sales by almost 60%, and the latter at around 40%. This leaves tablets with only 2.33%.

In 2020, the market was worth $1.2 billion with 19.5% year-over-year growth. Device use grew more popular due to recent surges in online schooling and at-home working.

13. Expectations are that Android devices are to outsell iOS tablets by 2026.

Of all the tablet manufacturers, Android is the only real competitor to iOS. The former continues to grow popular due to its more affordable prices and versatility. 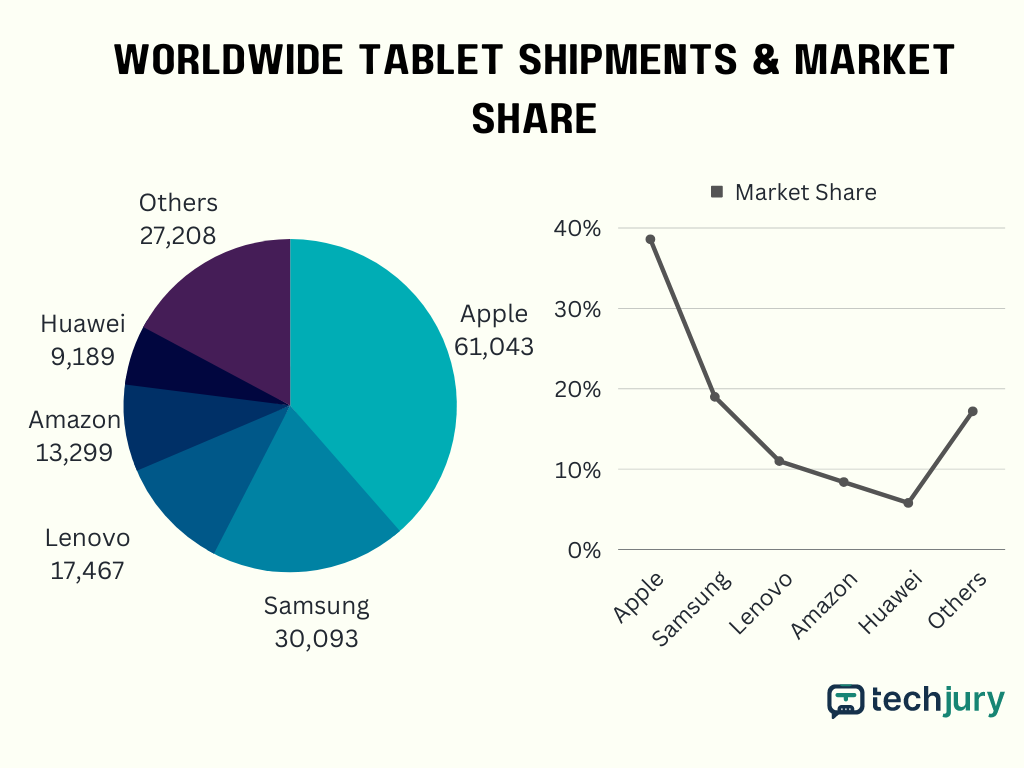 Now let’s look at what groups of people primarily use this kind of device.

16. Generation X and Millennials use tablets the most.

Millennials are in the lead in using this type of device at 55%, but Generation X doesn’t lag far behind at 53%. And even the Boomers are actively engaged with new technologies at 52%.

Statista’s tablet statistics show us that the interest in them is split almost evenly between the sexes.

These devices seem luxurious since most people buying them have higher incomes. The stats show that 3 in 5 people using them earn more than $75,000.

Statista’s tablet stats show us that this rate has kept the same pace for the last three years.

20. 51% of tablet users graduated from college.

PewResearch states that more US tablet users are recipients of higher education than not.

This number continues to increase over time. For example, in 2016, the average tablet session was 5.2 minutes.

Overall, these facts about tablets prove that they’re still trendy. They’re the perfect mobile solution that provides a larger screen for your studies or video entertainment.

This article showed you what group of people use these devices and how and when they use them.

We also covered important information about the devices' market share.

Now that we’ve reviewed these tablet statistics, you can decide for yourself if a tablet is worth your time.

How many tablets are there in the world?

While there aren’t exact statistics, we know that in 2021, 168.8 million units found their way to customers. So, the answer is millions, if not billions.

What percentage of people use tablets?

What age groups use tablets the most?

People from 23 to 59 years old use these devices the most.

Bibi
7 months ago
I am definitely considering to buy a tablet for my work now.
Reply
Leave your comment