What Is Blu-Ray? [Everything You Need To Know]

You've probably heard of this term many times but have no idea precisely what Blu-ray is, and what it means.

Maybe you know it has something to do with disc formats and videos?

Well, in this article, we are going to go through everything you need to know about Blu-ray, covering meaning, specifications, types, differences, and more!

Consumers first saw two high-definition disc formats in 2006: Blu-ray and DVD. Like its competitor HD-DVD, Blu-ray increases the depth, color, and detail of the images you see. While In 2008, HD-DVD became obsolete, Blu-ray technology and DVD remain popular.

What’s so special about Blu-ray?

It is possible to store more data on a single such disc because it employs a different type of laser. It is blue (hence the name) and operates at shorter wavelengths of 405nm. This implies that it can read information more carefully and accurately.

When Was Blu-ray Invented?

The Blu-ray Disc Association is a consortium of companies that developed the technology.

In June of 2006, the format was available to consumers, around two months after the HD DVD format had launched.

What Is the Purpose of Blu-ray?

A single Blu-ray disc capacity can store most people's hard drives with the typical storage capability. The original Blu-ray format featured a single-sided capacity of 27 gigabytes (GB) and a dual-layer capacity of 50 GB.

Additionally, Blu-ray has data streams of 36 megabits per second (Mbps), which is sufficient for video recording at a high quality.

Current CD and DVD players don't have the blue-violet laser necessary to read Blu-ray discs. On the other hand, Blu-ray players can play DVDs and CDs if they have the proper lasers.

So now that we've addressed your query about Blu-ray's purpose and definition, let's move on to the more intriguing part: its advantages!

Blu-ray's dual-layer ability to store vast amounts of data is one of its primary advantages. This disc can carry up to 50GB of data, while a normal Blu-ray disk can hold 25GB of data.

The employment of blue-violet Blu-ray lasers is a significant factor in this.

There will be no unlicensed devices able to play any audio and video content that HDCP protects.

Manufacturers are following the recommendations of the Blu-ray Association to provide backward-compatible players. Such systems can read and write data from older disk versions.

Additionally, Blu-ray technology provides a DRM service that obstructs private information. An iTunes-like protection method assures that one can only duplicate a disk a certain number of times.

Now that you know what Blu-ray's benefits are, let's go to the next part of our article:

Now that you know the Blu-ray definition, it’s time to discuss the specifications.

BDs offer the most storage capacity of any consumer-level optical disc currently on the market. 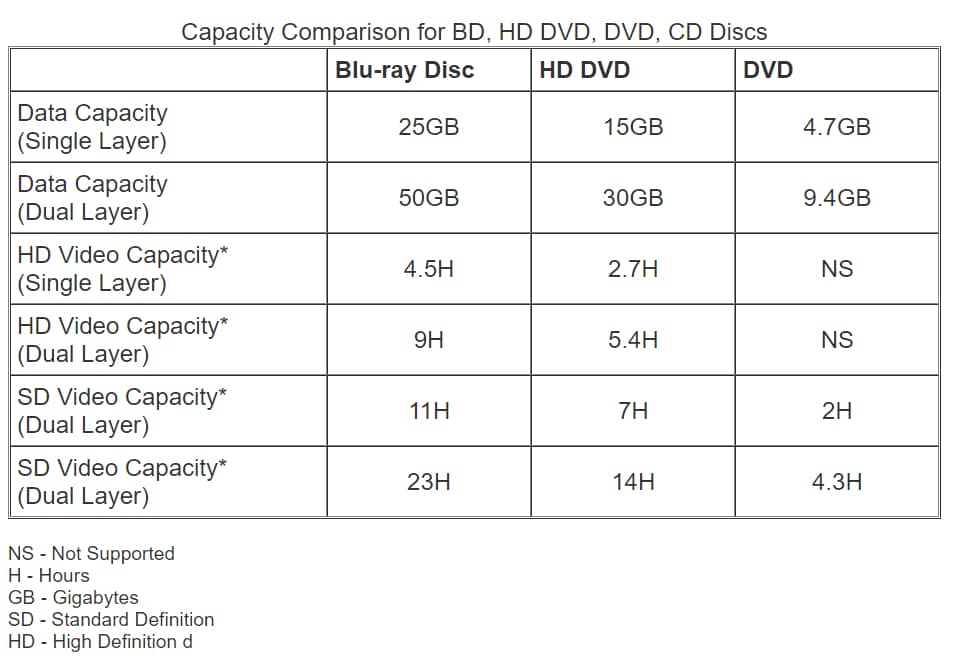 Now, about the Blu-ray specifications for video.

The high-definition discs can store up to 1920x1080 pixels and 24 progressive. Or, in other words, 50/60 interlaced frames per second. At the time of their release, DVD-Video discs could only hold 480i (NTSC) or 576i (PAL) resolutions.

As a reminder, PCM is the standard for Blu-ray audio, but it doesn't have the maximum bitrate.

It's the equivalent of Dolby Digital Plus, many orders of magnitude behind what is termed High Res Audio today, but still as excellent as a CD.

The table below shows the primary audio streams' specifications.

If you don’t like the sound of the recorded audio, you can always use audio editing software to fix things up the way you want it.

You can obtain a great image by connecting your Blu-ray player to your HDTV through component video or HDMI. You'll need a receiver with HDMI or multichannel analog inputs if you want to use next-generation audio with a Blu-ray player.

Optical and coaxial digital connections can deliver regular Dolby Digital and DTS, but they lack the bandwidth required to provide the new, more detailed versions.

The best way to enjoy these latest audio Blu-ray codecs is to use an HDMI connection on a modern receiver to decode Dolby TrueHD and DTS-HD Master Audio.

You can also download BD-Live material via this form of connection and include it on Blu-ray data discs.

The ethernet connection on every Blu-ray player with Internet access allows you to connect your modem or router directly to the device via a CAT-5 or CAT-6 cable.

If you don't already have a Wi-Fi connection in your house, certain players allow you to connect wirelessly through an extra dongle or built-in Wi-Fi.

Ultra HD Blu-ray players are capable of playing any Blu-ray disc. Using a modern HDTV, the player will produce a standard HDTV signal.

Ultra HD Blu-ray players will also be able to downscale and convert HDR to SDR content so that it looks as good as possible on the attached TV.

It is not yet possible to play Ultra HD Blu-ray discs on a Blu-ray player that does not support the format.

You can now acquire 4K Blu-ray players, which replaced DVDs as the primary way to watch high-definition movies at home. The question is, do you need an upgrade?

We'll look at the differences between them so you can make an informed choice.

Storage space on Blu-Ray data discs is much more than that on DVDs.

The capacity of a DVD is 4.7 gigabytes—just the right size for one movie. As long as it's less than two hours in length, you'll need either two DVDs or a 9GB double-layer DVD.

On the other hand, double-layer Blu-ray discs have a data storage capacity of 50 GB.

To most people, "image resolution" refers to the quality of the picture on the disc as it is being seen. Even when comparing the pixel counts of DVDs and Blu-rays, Blu-ray technology remains the clear winner. A DVD player is a low-quality gadget.

Because Blu-ray was designed for high definition, your movies will look their best when played back in 1080 HD on a suitable player.

From all the Blu-ray features and specifications we discussed above, it’s time we got to the sound quality part.

It may be the better option if you value clear audio as a key component of your movie-watching experience. The supported formats include, but are not limited to:

With Blu-ray technologies, you can achieve theater-like sound via home systems that can decode various formats. A good audio system is required if you wish to go beyond Dolby Digital and DTS.

Interactivity on Blu-ray discs is much superior to that available on DVD, enabling the creation of more complex games, instructional materials, and cinematic enhancements. For those who own an iPod, PSP, Zune, or other portable media player, many Blu-ray discs also come with a digital copy of the film.

As early as 2012, Samsung and Panasonic were selling 4K TVs, but it wasn't until 2016 that the first 4K Blu-ray players from both companies appeared on sale. These players are now readily available on the market, and Blu-ray discs and streaming services compete with this type of content.

This makes it easier to get your hands on a high-quality 4K experience.

Even though it's becoming more and more of a niche market, 4K Blu-ray continues to wow us with its incredible image quality and HDR advancements.

The 4K Ultra HD Blu-ray disc capacity is much greater than that of a regular Blu-ray disc. So, you can put Ultra HD movies on it.

When it comes to home video, the nostalgic analog experience is what's keeping people from abandoning their collection of Blu-rays, cassette tapes, etc..

You can't beat the feeling of pulling a disc out of its case, putting it in your media player, and witnessing the technology in action. In addition, people have a stronger emotional connection to physical objects, according to statistics.

A digital copy can't replace the sense of connection you get from holding something tangible like a Blu-ray or book in your hands. It’s like the eReader vs. book debate.

We hope that the Blu-ray information in this article was interesting and valuable to you. Feel free to tell us all about the first movie you’ve ever watched on Blu-ray!

What is the purpose of Blu-ray?

What is the difference between HD and Blu-ray?

What is the difference between DVD and Blu-ray?

On your DVD, you'll only be able to see 480 standard definitions (SD) movies. Blu-ray 1080 HD capabilities. Knowing what Blu-ray is, is convincing enough that it’s the best option if you want a high-quality picture.

Is Blu-ray actually better than DVD?

Yes, Blu-ray is superior to DVDs in many ways. Also, it's better than streaming since it provides more precise images, more space for "extras," and generally a better movie-viewing experience.