What Is New in Overwatch 2? [Heroes, Maps, Modes, and More]

The hotly anticipated sequel to Overwatch—one of the best team-based shooters right now—has gone into Early Access this October 4th to excellent reviews.

But what is new in Overwatch 2? Are there any new heroes, maps, and modes?

Yes! All of that and more!

The biggest selling point of Overwatch 2, and the reason for several delays, is its new story mode that you can finally play yourself instead of consuming it via animated shorts.

However, as revealed by the game’s developers several months ago, the PvE campaign was not expected to be ready for the October release, so the game launched as an incomplete ‘Early Access’ version, which will be updated and completed over time.

Per the latest official update, the entire story content is coming in 2023 and will explore the world and lore of Overwatch in an in-game setting for the first time ever.

Where Can I Play Overwatch 2?

The game comes with a cross-progression feature (uses a single Battle.net account) that allows you to carry over and access your progress and unlocks across different devices:

Furthermore, Overwatch 2 comes with the fan-favorite crossplay feature that allows you to play together with all of your friends, regardless of their gaming platform of choice.

Is Overwatch 2 Replacing the Original Game?

October 3rd was the last day fans could enjoy everything the original Overwatch had to offer with its 6v6 modes as its servers were shut down in preparation for the launch of its next-generation sequel the following day.

With multiple trailers, a brief alpha, and two betas, we've learned quite a lot about all the changes and features coming to Overwatch 2, which include new gameplay mechanics, maps, modes, returning and new heroes, QoL improvements, cosmetics, and much more! 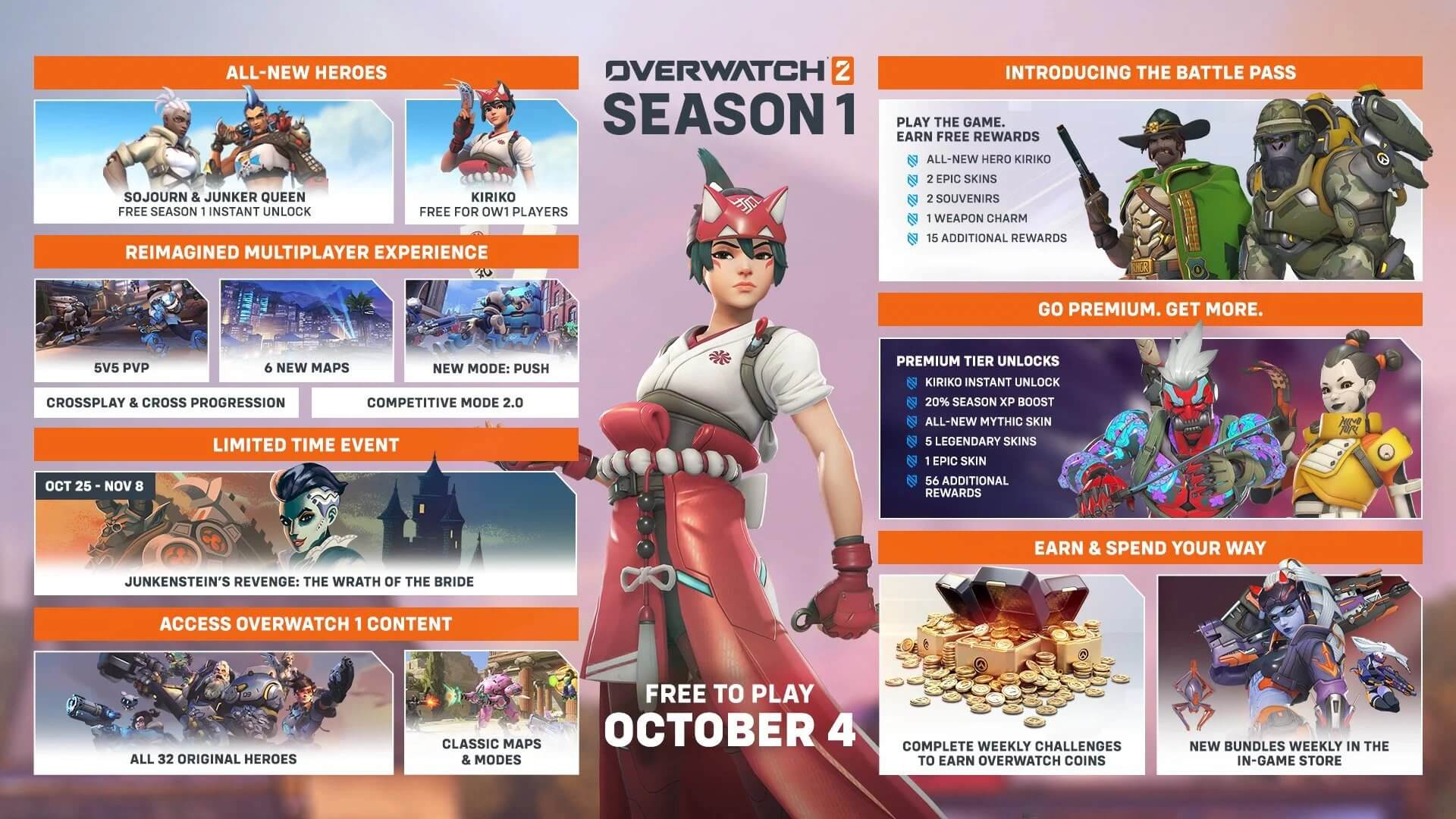 Joining the fight among the ranks of soldiers, scientists, and adventures are the following:

Note: After Season 2 and the introduction of a yet unannounced tank hero, Blizzard is planning to implement a new hero every other season, starting with Season 4.

Besides these three new editions for a total of 35 heroes, the existing lineup sees drastic changes as Blizzard has adopted a new hero design philosophy that allows for a broader range of effective picks during most matches, thus moving away from specific hard counters.

In addition to the visual skin updates, every hero has been subjected to balance changes, ranging from simple updates to their skills (in terms of spell cooldown) to a complete overhaul of their entire skillset, such as Orisa’s new abilities kit built from the ground up.

The ultimate goal of the rebalancing is to shake up the established meta and allow players greater freedom in composing their teams. For instance, if the enemy team has picked Tracer, you don’t have to pick Cassidy this time around—Tracer’s hard counter in Overwatch 1.

Overwatch 2 has changed the classic 6v6 team formula to a more dynamic 5v5 format, which greatly impacts the game’s pacing and team compositions.

At launch, players were able to try out a new game mode called ‘Push’—taking place on a symmetrical map where players vie for control of a single robot that pushes one team’s barricade toward the base of their enemies.

The objective is to get the robot to push your barricade further into enemy territory than your opponent, and the winning team is declared once the barricade is pushed all the way to the end or the timer runs out. 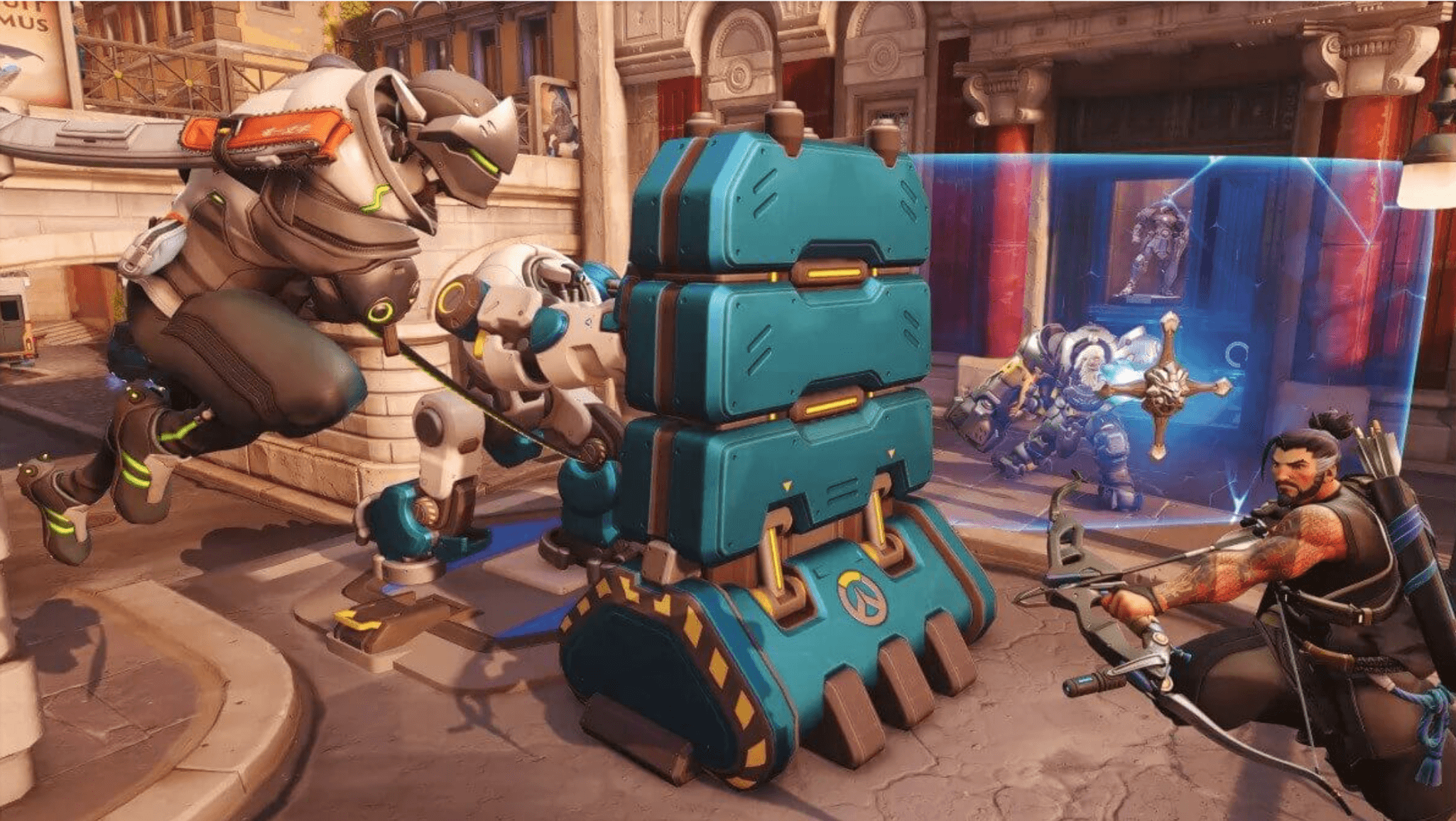 illustrated above: a team defending the robot as it pushes the barricade

Additionally, a new unannounced core game mode that will be played on the biggest PvP map in the game’s history is coming to Overwatch 2 soon.

Aside from the new modes, players will witness the return of classic modes like Control, Escort, Hybrid, Capture the Flag, Elimination, Deathmatch, and Team Deathmatch.

To make room for the new ‘Push’ mode, Blizzard has removed the legacy ‘Assault’ maps.

Assault was a game mode with two capture points on maps like Hanamura, Volskaya, and Temple of Anubis and an objective to capture or defend these points.

Despite its removal, players will still be able to access the Assault maps via custom games.

In addition to classic maps that were updated with new assets and lightning, Overwatch 2 comes with a batch of new additions:

India, Gothenburg, and Nepal have also been finished, but they are yet to be released.

Blizzard is finally implementing a modern ping system in Overwatch—designed to help you communicate faster and better, especially while you are focusing on your enemies.

Now, instead of using simple voice lines, you can call out your moves with visual indicators for anything from requesting help to watching an area, attacking, defending, and more. 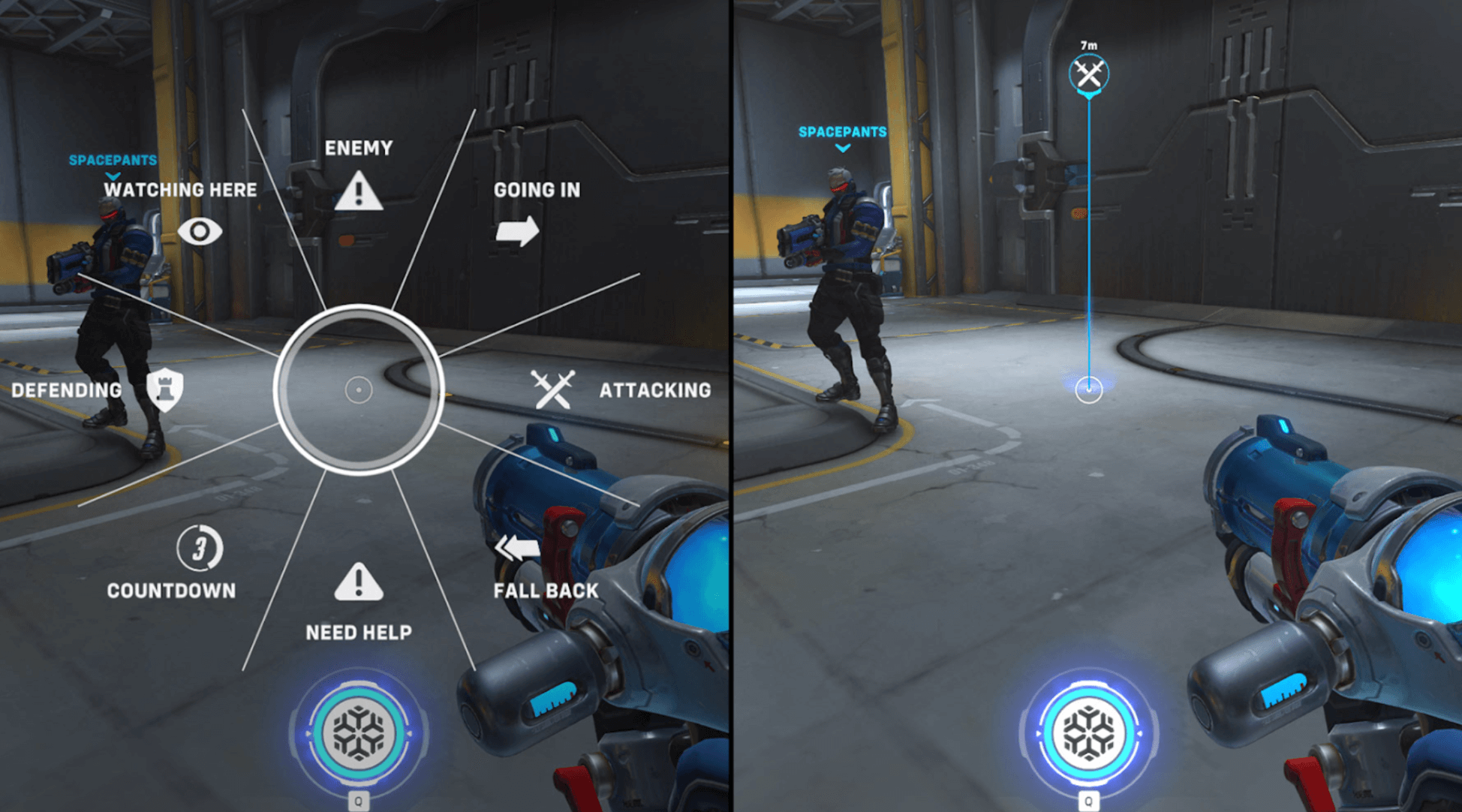 The new scoreboard includes more information than what was displayed in Overwatch 1.

Now, you can also view several support stats, including damage dealt (DMG), healed (H), and mitigated (MIT), in addition to the standard deaths (D), assists (A), and eliminations (E).

The biggest novelty coming to Overwatch 2 is its first-ever PvE campaign that will explore the Overwatch universe through a thrilling story campaign and repeatable hero missions.

Scheduled to be released in 2023, players will experience the Overwatch saga like never before once they rally other agents to their cause to confront the Null Sector all across the globe.

The upcoming free-to-play Overwatch campaign, which is a complete PvE co-op experience with detailed missions, gorgeous cinematics, and hero music themes, will see the heroes banding together again to uncover the plot behind another Omnic uprising.

After gathering their team and picking any hero they want, players will fight against waves of enemies and various challenging bosses across all of the game’s maps (some of them even expanded) to complete any number of objectives.

After completing the narrative-based story mode, players will get access to highly replayable ‘Hero Missions’, which are developed as the Overwatch 2 end-game content.

The game’s developers claim they’ll deliver hundreds of these missions on all of the game’s maps and that they will never feel repetitive since they’ll feature varying objectives.

For an added level of variety, devs are also implementing a day–night cycle and varying environmental effects, which will be rotated across all existing and future maps.

To add a sense of progression and reward persistent players, Blizzard is adding a ‘Talents’ system to its PvE modes, which will include various augmentations to existing abilities.

Every hero will get gradual access to about 50 talents in three separate trees. For instance, the screenshot below shows Reinhardt’s talent trees: Crusader, Juggernaut, and Guardian.

While Overwatch 1 had health packs, the sequel expands the list of items significantly, which players can equip and use when completing the game’s PvE content:

What Are the Overwatch 2 Seasons? 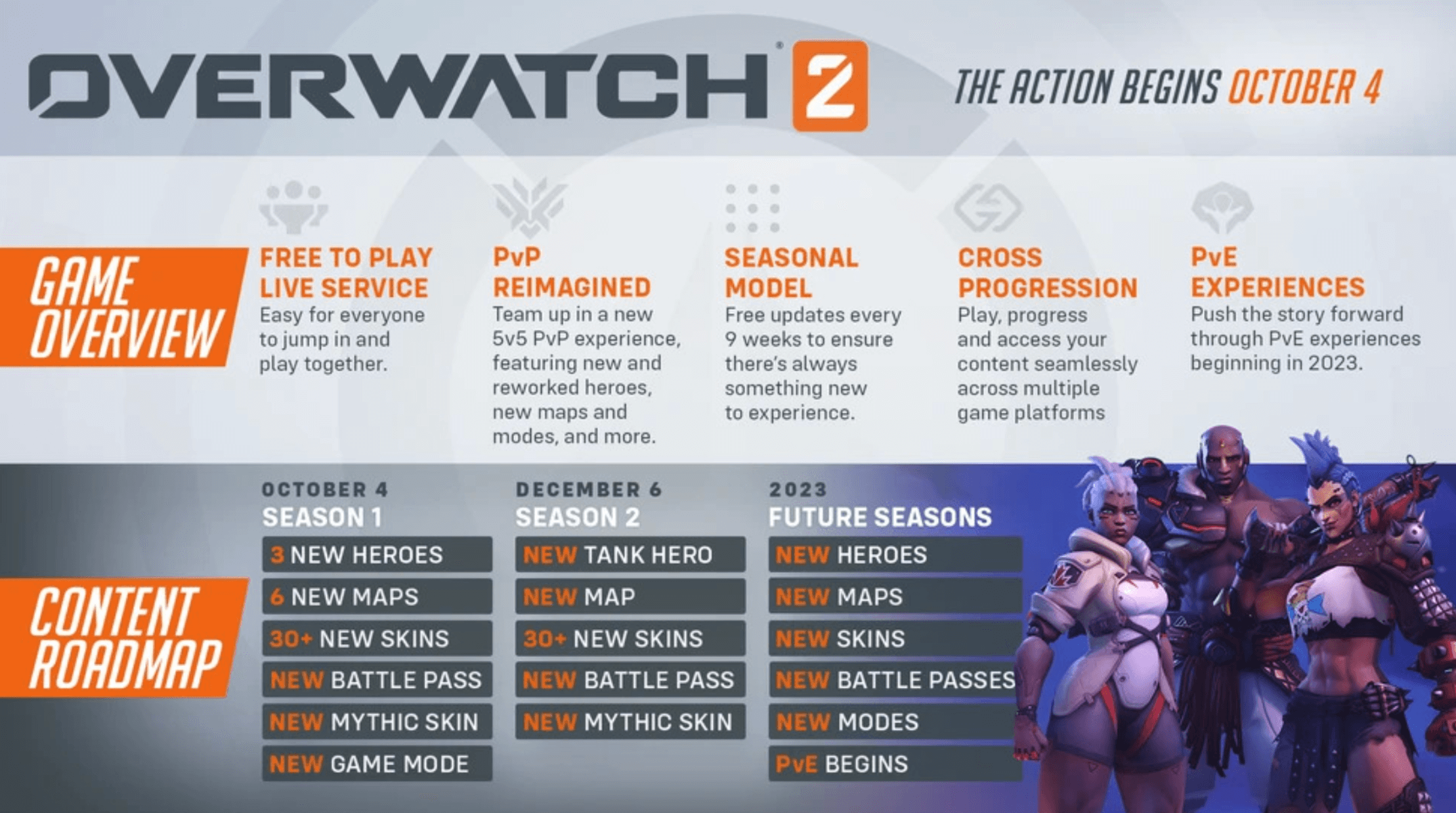 As you can see, Season 1 came with three new heroes, six new maps, updated and new skins, a new game mode, and a Battle Pass—a staple of the live service model.

These seasonal updates will occur on a regular cadence and will always include a new progressive battle pass that will unlock various cosmetics as you level it up.

Furthermore, while Season 2 is also coming with a new hero, map, and skins, future seasons will alternate between releasing new heroes or new maps and mods.

Note: Blizzard will also use each season to introduce new hero balance changes.

What Happened to the Loot Boxes?

With loot boxes becoming increasingly unpopular, they are finally going away in Overwatch 2, and players will now get exactly what they paid for by using the game’s virtual currency—Overwatch Coins.

Moreover, the in-game shop will constantly update and offer weekly featured items in various themes, which will change with each season, several rotating bundles, and a ‘Just for You’ section with items personalized to your playstyle.

While the Overwatch 2 Battle Pass is free for everyone, you will only unlock about 20 items during your progression, with the remainder locked behind the ‘Premium’ track.

Challenges are a new mechanic that rewards players with achievements and Battle Pass XP.

Depending on whether or not you can complete them more than once and when they reset, they are classified into daily, weekly, seasonal, competitive, lifetime, and hero challenges.

The difficulty of completing each challenge will also vary based on their type.

Overwatch 2 has plenty to offer despite lacking its long-anticipated PvE mode at launch. In any case, by experiencing everything its fully-fledged multiplayer has to offer, from the new heroes to the exciting new maps and modes, you can better prepare for the upcoming story campaign.