Well, it’s available across various PlayStation, Xbox, and PC stores, and we tell you more about it and the editions you can purchase below.

Where Can I Get Call of Duty: Modern Warfare II?

The MWII successful marketing campaign and Beta Weekends have spurred the interest of avid FPS gamers everywhere, who can’t wait until October 28th for the game’s release.

So to make it available to everyone, Activision offers even more extensive console and desktop platform support this time around:

If you pre-order the game digitally, you can start the story mode a week before release, giving you ample time to complete the campaign and get ready for the multiplayer experience.

However, before purchasing the game, you should also read about the new and innovative changes Infinity Ward implemented in MWII over its predecessor and the best graphics settings that will help you optimize your gaming experience. 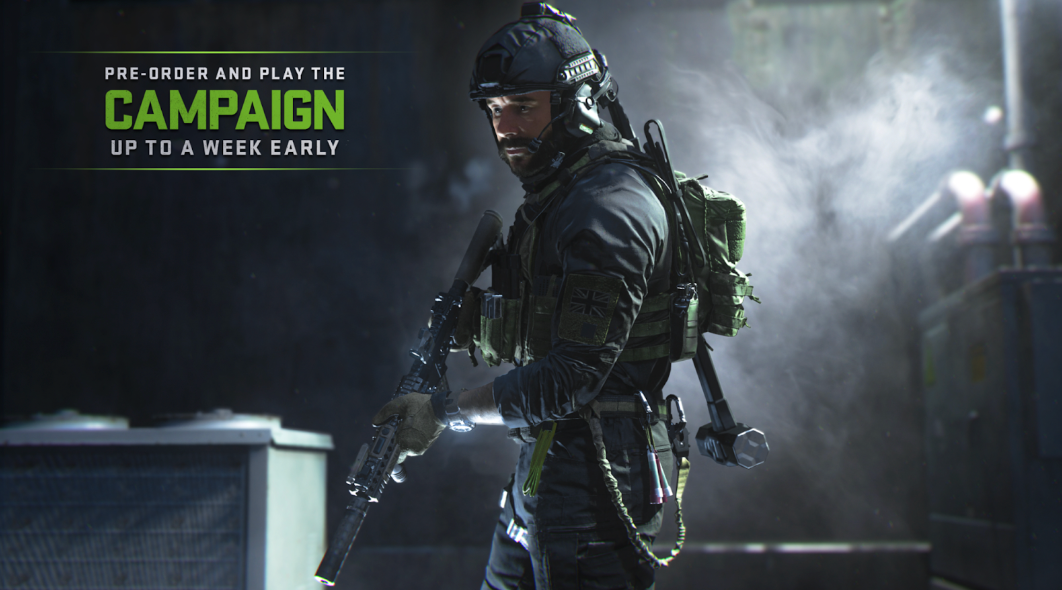 1. How to Get MWII on PlayStation?

If you are a PS owner, you can easily purchase a digital copy of MWII straight from the PlayStation Store or get it from retailers if you want to own a physical copy.

The PlayStation MWII is available for both PS4 and PS5 in two editions::

Note: You need a PS Plus subscription to play the game online.

There are key differences between the MWII physical copies on PS4 and PS5:

Xbox gamers have access to the same offer as their PS counterparts, and they can purchase both a digital and a physical copy of the game.

You can get a digital copy of MWII for either Xbox One or Xbox X|S in two versions:

If you are a PC gamer, the best place to get Call of Duty: MWII is via the Battle.net Shop, as it’s Activision’s official store.

Here, you can buy one of two editions:

Currently, there are no additional subscription costs to play the game through Battle.net, and the only requirement is to have a mobile phone number linked to your Battle.net account.

Thankfully, the biggest PC gaming platform in the world—Steam—sees the return of Call of Duty with this year’s title.

Modern Warfare II is available for purchase through its official Steam Store page in:

Just like with Battle.net’s version, the only requirement to play the game on Steam is to have a mobile phone number linked to your account.

Infinity Ward’s latest and bestest Call of Duty comes in both digital (for consoles and PCs) and physical copies (for consoles) in two main editions:

If you get either edition before release, you get certain pre-order bonuses that we list below.

What’s included in the Standard and the Cross-Gen Editions?

The $69.99 price tag gets you the following items:

Also, you can use the Cross-Gen version on both old and new-gen consoles. 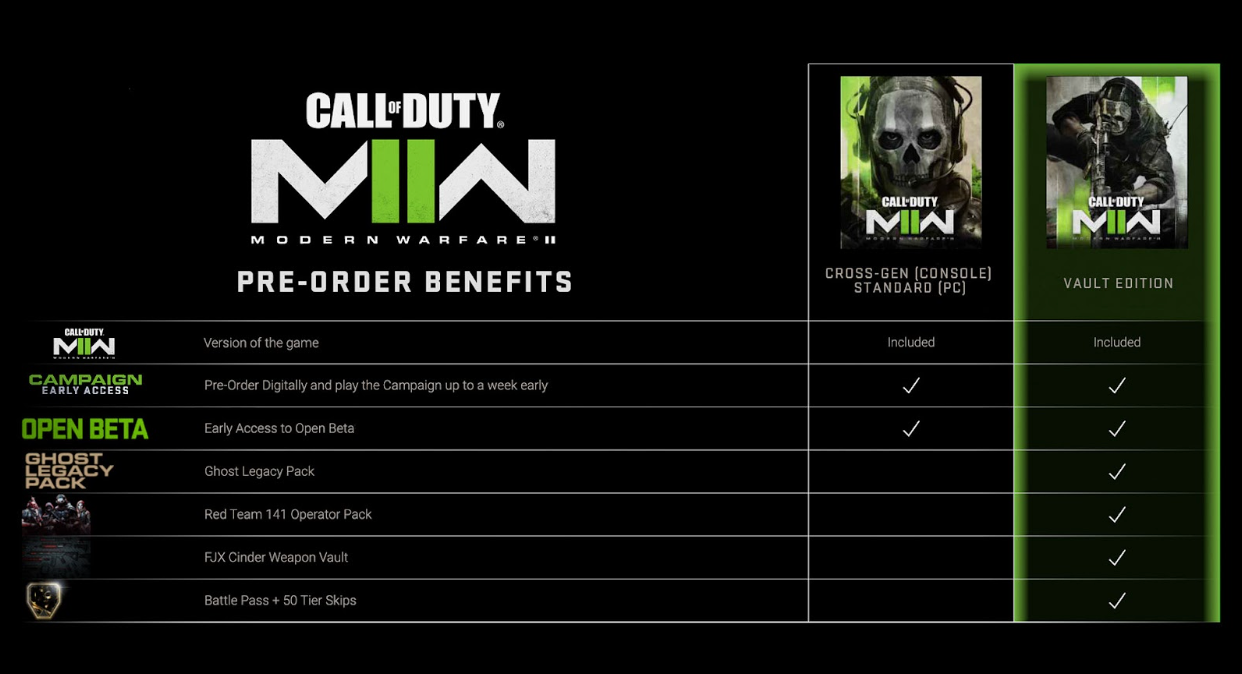 What does the MWII Vault Edition come with?

If you want the ultimate MWII experience, go for the digital Vault Edition and all it offers:

Note: You can upgrade any digital Standard or Cross-Gen edition to the Vault Edition by paying the price difference through the store where you originally bought the game. 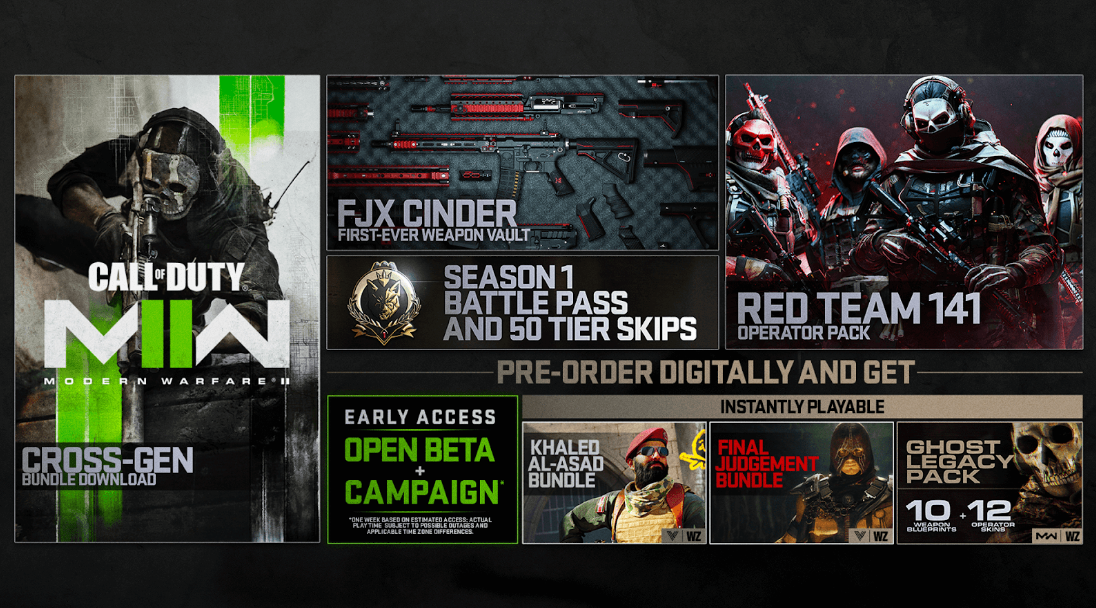 How to get the CODE (Call of Duty Endowment) Edition?

The CODE Edition is a physical copy for consoles sold exclusively by select sellers, and it comes with a CODE-themed Calling Card, Animated Emblem, and Sticker that you can use in Call of Duty: Modern Warfare II, Warzone 2.0, and DMZ.

Note: This game version will not work on a digital-only PlayStation 5 and Xbox Series S.

Finally, if you pull the trigger and purchase the game before its official release, you will get additional goodies in addition to early access to the campaign story.

For instance, all digital pre-orders come with additional content for CoD: Warzone and CoD: Vanguard in the form of two bundles:

Note: These two bundles are unusable on Steam since CoD: Warzone and CoD: Vanguard are not available on this platform.

PS players who pre-order a digital copy will get access to the Oni Operator Pack, which includes: an operator skin, a high-level weapon blueprint, and dual-wield knives.

Ultimately, if you are set on playing Modern Warfare II, buy it before release to get plenty of pre-order benefits, some of which you can also use in the previous titles. True fans should also consider purchasing the ultimate Vault Edition, as it comes with a lot of additional goodies and perks that will help you get the jump on the competition from the first day.