You’re looking for your next favorite restaurant, bar, or hairdresser salon? Where do you go?

Yelp, of course! The platform provides reliable information about all kinds of businesses and services based on user-written reviews.

The two former PayPal employees, Russel Simmons and Jeremy Stoppelman established Yelp in 2004. But is it still relevant today?

In this article, we’ve gathered all the essential and exciting Yelp statistics you need!

Let’s answer all the burning questions:

Must-Know Yelp Stats and Facts for 2023

1. Over 178 million people visit Yelp each month across desktop, mobile, and app versions.

There are 33 million unique monthly mobile app visitors each month. The platform might be almost 20 years old, but it’s still trendy, filling an important niche.

How Many Yelp Total Reviews Are There? 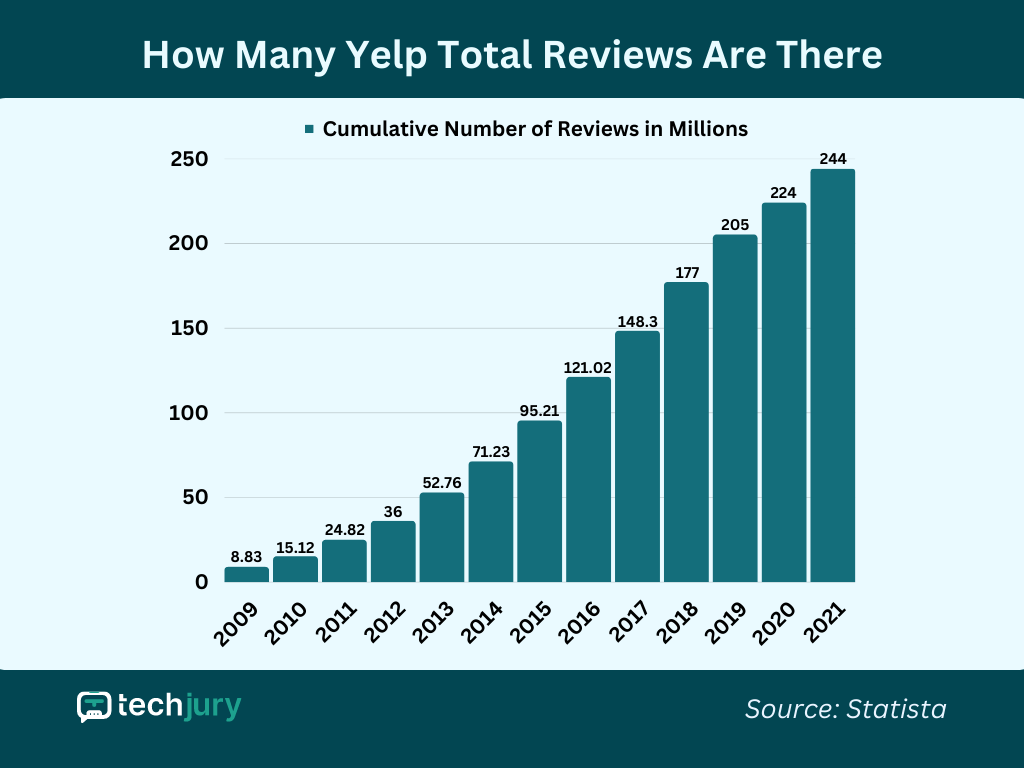 From details about its current user base to important data about its system, this is where you’ll find curious facts about the platform. Let’s start with the basics:

57 million customers choose to use their mobile web browser, 33 million prefer the mobile app, and 46 million use their desktop browser. Thus, contributing to the overall 178 million monthly visits through all platforms.

Now that you know how just many monthly active app users Yelp possesses, it’s time to move on to another pressing subject:

4. Home and Local services is the #1 reviewed business category on Yelp.

The platform has a massive range, meaning you can leave a review for practically any kind of business you can imagine. Still, Home and Local services lead the categories with 19%. Next on the list are Restaurants with 17%, followed by Shopping with 16%.

5. 97% of Yelp users visit the platform to make a purchase.

So 97% of all visitors declare the platform reliable. They open it to check if something is worth spending their money on.

Time for the next portion of useful Yelp fast facts:

So, 63.6% of users will first check in with Google reviews (through Google Maps and Search) before deciding what service to use. However, Yelp isn’t that far behind—over 45% of customers favor the platform as their source of where to eat, shop, or who to trust.

Not that big of a difference with the tech behemoth. Apparently, the efforts of Yelp’s team are not in vain.

7. Yelp is the top website in its niche in the US.

The platform undeniably ranks first in its niche in America. But who follows? The top three are completed by WhitePages and YellowPages.

You can find a review for almost anything on the platform. You can also find almost anything worth knowing about it here. So, what group of people makes up the majority of its users? Let’s see: 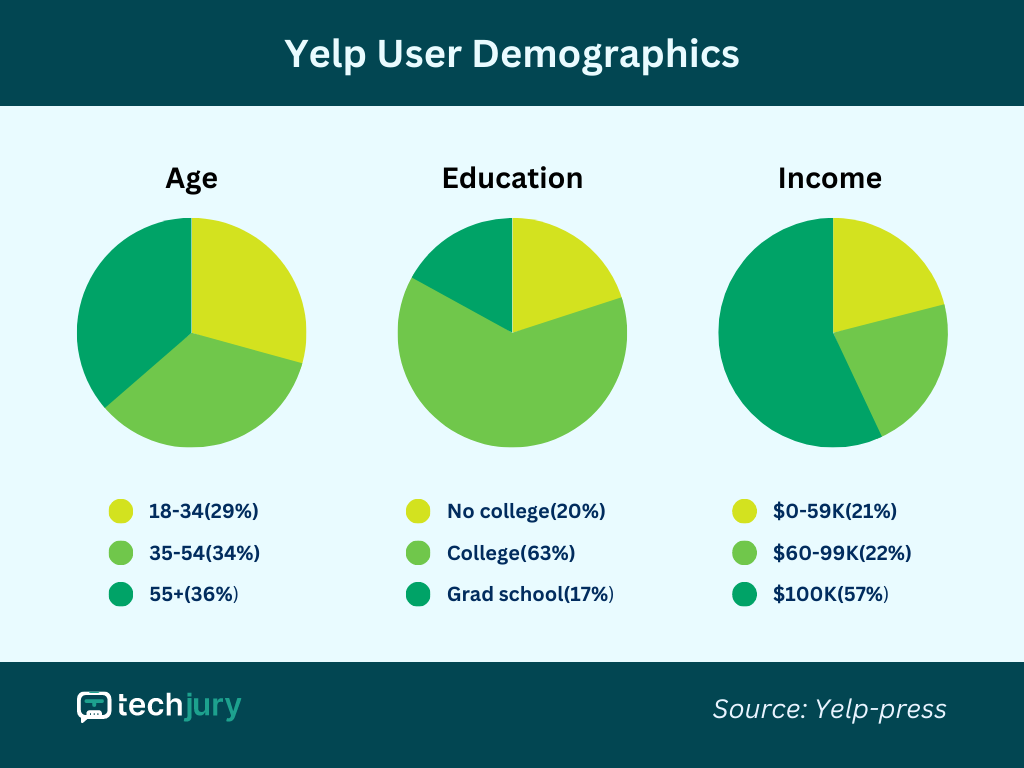 8. Women use Yelp more than men.

So women are bigger fans of Yelp than men. According to the latest data, 53% of its user base is made up of women, while the remaining 47% are male. Even though the difference is slight, the female part of the population still takes the leading position.

Apparently, US users are split almost evenly into age categories.

11. More than half of Yelp visitors have gone to college.

Apparently, the majority of its users are educated. Stats report that 63% of them went to college, while 20% hadn’t. Additionally, 17% only went to graduate school.

Although most of its user base is from the US, people from all over the world use the platform. What’s more, they can choose between 42 languages and a variety of features.

Once again, Yelp’s consumer fact sheet comes to our aid when in need of valuable info…

This time it’s only to confirm something we know or suspect: Yelp is available and being used worldwide, but almost its entire audience is US-based. No surprise there, right?

The app might be the least preferred way to access the platform, but still, there are some exciting facts about it. Let’s hear them:

14. People who use the app generate more activity.

Did you know that? Consumers who visit the app go through 10 times more pages than those who use the desktop version. Fascinating, right?

Keep reading for the next piece of amusing Yelp info:

15. People prefer to publish reviews through a mobile phone.

Well, that’s a nice change of pace… though, it’s still quite logical—you’ve just visited this restaurant/beauty salon/gym/auto repair shop/even landmarks, etc., and want to share your experience, be it good or bad.

So it’s no surprise to report that 60% of reviews and photos came from smartphones.

And that’s counting only Google Play Store downloads. The app has 516,000 reviews leading to an overall 4.8 stars rating.

17. Over 46 million users visit the desktop site every month.

Although Yelp’s users prefer using the mobile web version, many still visit the good old-fashioned desktop site. By “many,” we mean millions… to be more precise, more than 46 million people!

How Many Businesses Are on Yelp?

18. There are over 5 million business listing pages on Yelp.

This number shows that Yelp still has a great impact on local businesses.

19. On average, 16% of all businesses boast five-star reviews.

What about the others?

You’re still wondering how massive and influential Yelp’s platform is? Check out these stats to learn all you need to know about it: 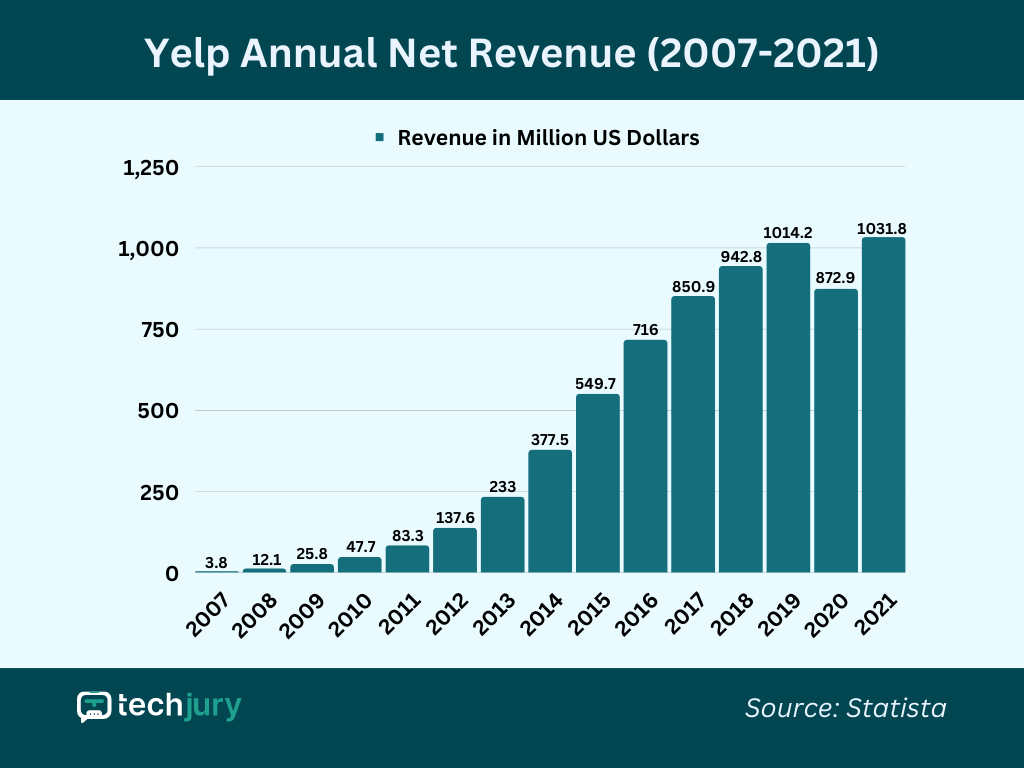 When it comes to business segments, the Yelp stat sheet is certain: “Home and Local Services” is crowned the winner, with 61% of the ad revenue in Q2 2022. Interestingly, restaurants claim the remaining 39%. 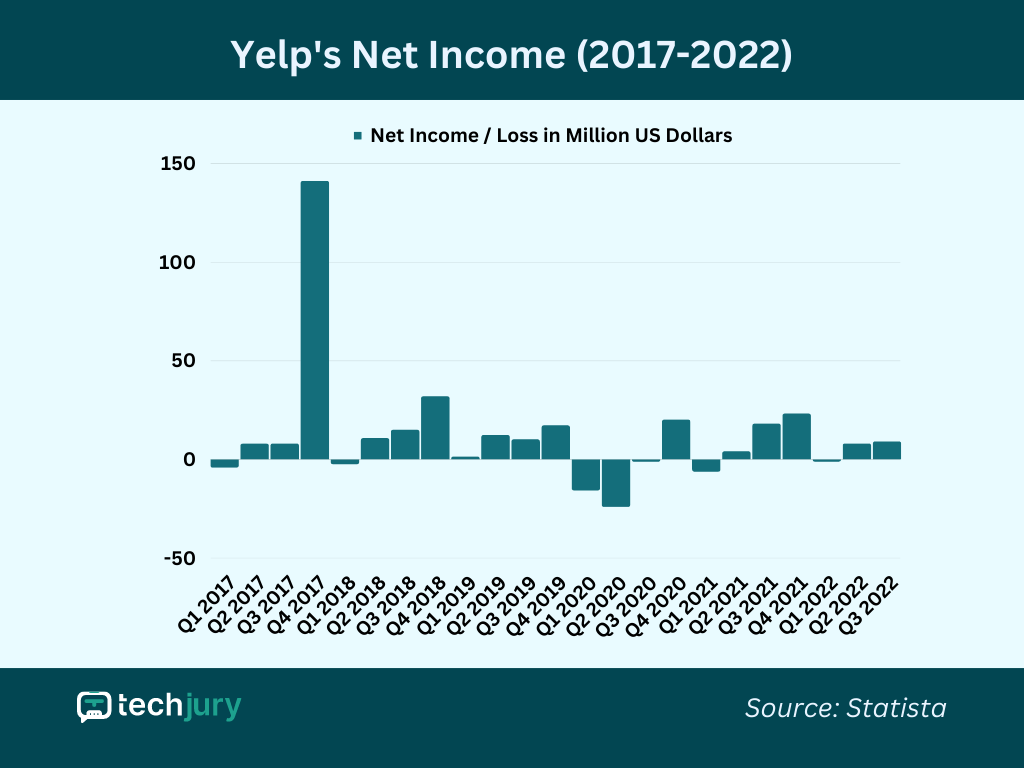 Here comes the cherry on top:

Here come some interesting tidbits about the platform. Enjoy!

23. “Open now” is the most used filter in customers’ searches of all categories.

Let’s take for example Yelp’s most famous category—Home and Local Services. “Open now” indeed tops the list. It’s followed by the “Request a quote” filter. People also want to know if companies accept credit card payments and whether they give out fast and informative responses.

The very first review appeared in October 2004. Jon B. gave their contribution by reviewing the Kabuki Springs & Spa in San Francisco.

25. Bottega Louie is the most reviewed business on Yelp.

The establishment boasts over 17,000 reviews. So there you have it—now you know what the most reviewed restaurant on Yelp is. But do you want to know what’s the top three? Second place goes to Phil’s BBQ (over 15,000 contributions), and the third is claimed by Founding Farmers, with almost the same number.

Our collection of Yelp facts has come to an end. We hope these prove to you that the platform’s still relevant in 2022.

It’s the perfect place to check your options and get inspired by finding your next favorite business or place, all based on unbiased customer reviews.

Simona’s desire to be a content writer came pretty randomly. But now, she’s dedicated to learning everything about technology and becoming the best at her job. Her favorite gadget is her iPhone, so she has all the know-how about it. She’s currently pursuing a Bachelor’s degree in English Philology. She is a dog person and dreams of having a Corgi (don’t we all?). She likes to cook, read books, and spend time with her family and friends.