Looking for fast-performing proxy servers? Proxies tend to be expensive or have uptime and compatibility issues. So, does this provider manage to solve these problems? Read our InstantProxies review to find out.

Whether it’s for more advanced security or an added layer of anonymity, there are plenty of reasons you’d need proxy servers. Doubly so if you’re running a company that does a lot of its business online.

Well, today we look at InstantProxies.

A service that claims to have servers that are both fast and affordable. The company offers different proxies for various use cases – from anonymous browsing to SEO and social media.

Are they worth your time and money? What do the user-written InstantProxies reviews say? This is what we’ll discuss here.

InstantProxies is a simple service – what you see is what you get. It gives you access to the proxies you asked for with no strings attached. But still, what is the actual quality of the product you’re getting?

Test Before You Buy

Are you unsure about InstantProxies’ viability?

While there’s no InstantProxies trial, there’s a test feature you can try out on its website for free. You can specify the number of private proxies you want, as well as their purpose. 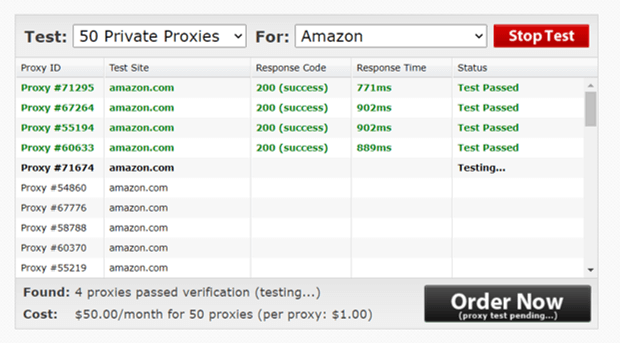 Not all proxies are created equal. Some websites will see way faster response times than others. So, it’s wise to make use of the test feature before committing to a purchase.

Now, you may be worried about data center locations, especially if you’re outside the US or EU.

The service claims to have a worldwide network, with centers in the US, Canada, Europe, and Asia. Your InstantProxies speed mostly depends on how close you are to a city that hosts its servers.

But here’s where the trouble is.

There’s no publicly available list of the cities where InstantProxies operates. I had to contact customer support to receive a definitive list of the supported countries.

When you choose to buy from InstantProxies, you get access to a special control panel for managing your proxies.

Proxies are authenticated via IP address, so while two-factor authentication is absent, you generally won’t need it. You can have a maximum of 10 authorized IPs and change them from the control panel.

So what else can you do from there?

From the control panel, you can test your InstantProxies speed and online status. There’s also a number of resources available, like tutorials and proxy tools.

That’s understandable. If you rely on proxies for work or security, you want the best uptime possible.

So how does InstantProxies fare in that regard?

The company guarantees at least 99% service uptime. That’s already a pretty good starting point. But does it manage to keep that promise?

According to InstantProxies’ monitoring system, the network had a 100% uptime for the past 30 days, as of writing. If those resources are to be trusted, uptime isn’t something you’ll have to worry about.

Limited bandwidth can be an issue when dealing with proxies.

However, as many InstantProxies reviews point out, one of the service’s biggest advantages is the uncapped bandwidth. So if you plan on using lots of data or want to avoid excessive charges, InstantProxies would be a good fit.

All pricing plans have unlimited bandwidth. You don’t need to buy an overly-expensive tier just so you can take advantage of it.

Are you looking to use your proxies for something specific? Social media, SEO, or e-commerce?

The servers on offer can be for a wide range of purposes; some are even aimed at particular websites. There are InstantProxies servers for Instagram, Google, Amazon, Ticketmaster, and Craigslist. You can even get proxies specifically for SEO and, of course, anonymous browsing.

So regardless of the use case you’re after, chances are you’ll find it here.

If you want proxies specifically for a tight layer of anonymity, worry not.

InstantProxies’ servers have a top-notch security standard protecting your data. You can bypass firewalls and content restrictions and access geo-blocked websites. You can also conceal your real IP address while browsing.

Ease of Use and Interface

The beauty of InstantProxies is its simplicity.

The service is pretty easy to understand and get the hang of. There are no complicated menus, confusing premium tiers, or anything else to get in your way.

But, in a way, this can also be a detriment.

Take, for instance, the so-called Advanced Control Panel. It may sound intimidating at first, but it really isn’t anything complex. Of course, the downside of that is the lack of any real customizability except for IP addresses.

Aside from this, however, the service is as user-friendly as it can be. It has a very simple setup – all you have to do is select the proxies you need.

There are InstantProxies for Sneakers, Facebook, Amazon, and tons more.

Each of these can be tested before you purchase, and they all give you access to the control panel. It’s a simplistic system, sure. But sometimes you don’t need much else.

With proxy servers, having access to good customer service is paramount.

The InstantProxies website says customer support is available 24/7. But how accurate is that?

For one, support is indeed available any day of the week. Even if you reach out during the weekend, you’ll receive a reply that same day.

Now, what about speed?

Communication happens via email, and there’s no live chat, despite what the website says. Responses vary depending on the time and day, but in my experience, it took around 2-3 hours.

Support agents are professional and helpful. If you encounter an issue with the service, chances are, the support team will be able to find a fix.

But there’s an alternative.

InstantProxies’ official website has a knowledge base with some tutorials and FAQs. Now, to be honest, it’s far from extensive. There are only eight tutorial articles and one section for frequently asked questions. 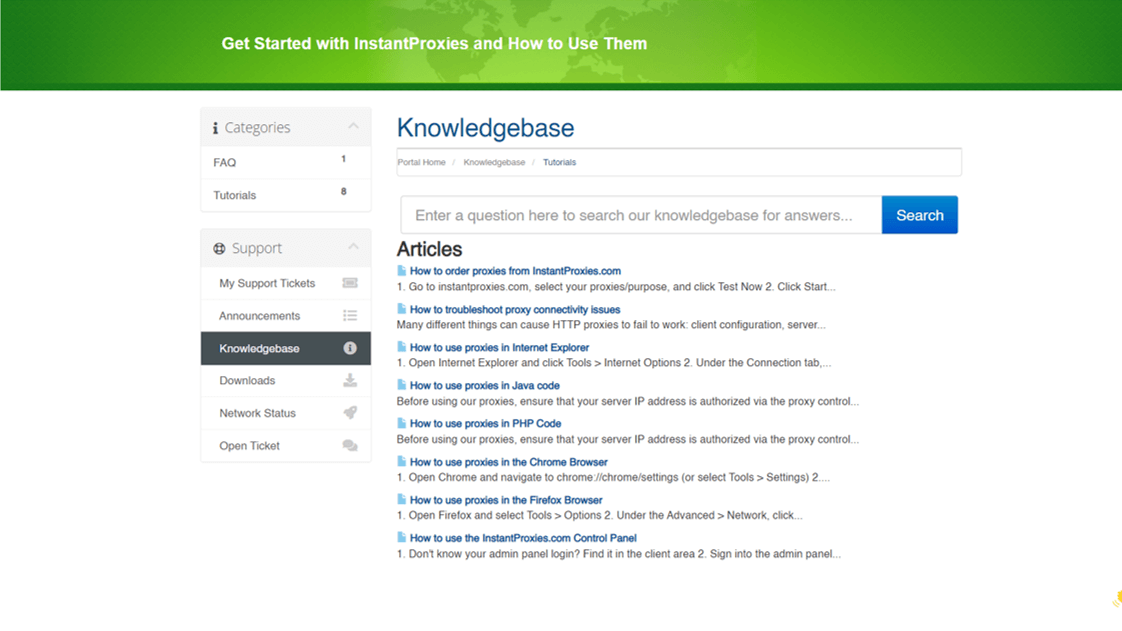 Yes, it’s not the most comprehensive resource you’ll ever see. But it’s worth going through before contacting support.

I’m sure you’re aware of how expensive proxies can be.

InstantProxies’ price plans are straightforward. But most importantly, they’re affordable. While many services can set you back thousands of dollars per month, InstantProxies is different. It has one fixed price per month with all benefits attached and no features locked off.

So how much will you be paying for your proxies?

It depends on the number of servers you plan to utilize. Here’s the full pricing list:

Each pricing plan includes access to multiple cities, depending on the tier. The 10 proxies plan gives you access to two cities, and each subsequent tier includes one additional location.

What about free plans?

Sadly, there is no free plan or an InstantProxies trial. The only way to test out the service beforehand is via the built-in testing feature.

InstantProxies offers refunds only in certain cases. For example, if the proxies failed to suit your stated purpose. And you must request your money back within the first week.

So there you have it – a proxy service that is simple to use, affordable, and with unlimited bandwidth.

At the end of the day, its simplicity might be limiting to some. The speed is also situational and dependent on how close you are to a data center. If you happen to be in South America, I’m afraid you’re out of luck.

It would be a tall order to find proxies that are any more affordable than this. InstantProxies’ price starts at $10/month, with no ongoing commitment. If you’re looking for proxies – this is it.

How to set up InstantProxies?

Once you place an order, you get access to the Advanced Control Panel. You can log in with your credentials and edit your proxies’ profile from there. This includes editing IP addresses and testing your servers’ connection.

Based on our testing for this InstantProxies review, the service is indeed legit. There are proxies intended for specific purposes and various locations. All you have to do is select the ones that fit you best and place an order.

How do I cancel InstantProxies?

You can cancel InstantProxies plans by contacting customer support. There, you’ll have to specify your account details and reason for cancellation.

My fascination with technology began from quite an early age thanks to computers and video games. Nowadays, I love anything related to music production and astronomy. Coincidentally (or is it?), both of those have a great deal to do with tech. Honestly, most of the stuff that can be accomplished with modern electronics kind of seems like magic to me. This is why I feel this strong need to constantly learn more about it and talk about it, almost to the detriment of others.